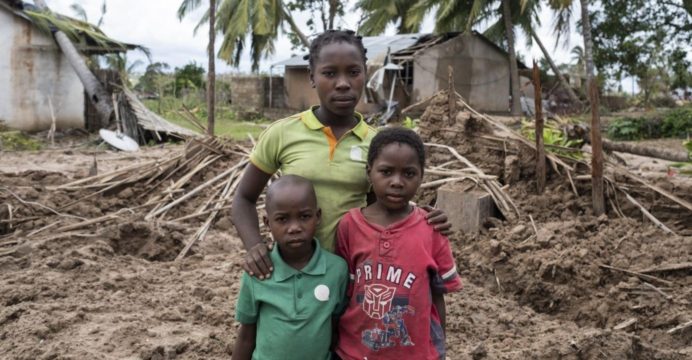 One year after Cyclone Idai, 2.5 million people in Mozambique remain in need of humanitarian assistance

One year after Cyclone Idai made landfall in Mozambique and set off a series of unprecedented climate-related disasters, 2.5 million people, almost half of them children, remain in need of humanitarian assistance. More than 3,000 children under five have been diagnosed with life-threatening severe acute malnutrition (SAM) after harvests were washed away in floodwaters. These children are proof that the victims of the climate crisis are foremost the poor and the very young.

Although Mozambique hardly contributes to global warming, the country has experienced multiple climate-related emergencies in the past 12 months. On 14th of March 2019, Cyclone Idai hit the port city of Beira and its neighboring towns in the central Sofala and Manica Provinces, leaving entire areas, including agricultural land, under water. Just six weeks later, Cyclone Kenneth hit the Northern province of Cabo Delgado, bringing winds of over 200 kilometers per hour. Meanwhile, the south of the country has experienced a severe drought, with further dire consequences for agriculture and food security. All these shocks have exhausted families’ resilience and decimated their livelihoods. It is estimated that 1,6 million people in the country don’t have enough food to eat.

With one of the lowest Human Development Index (HDI) in the world (number 180 of 189 countries), more than 46 per cent of the population in Mozambique live below the national poverty line. This deep poverty makes it challenging for families to build resilience by themselves, and each year, with new and stronger shocks, it is becoming harder and harder for them to recover.

“UNICEF and other humanitarian agencies are preparing for the fact that these extreme weather events will occur in Mozambique more frequently, with increasing ferocity,” said Katarina Johansson, acting UNICEF Representative in Mozambique. “Our recovery work therefore includes elements that will make the affected population more resilient to future natural disasters,” she continued.

As one of the steps towards building resilience, UNICEF is supporting the decentralized provision of health services through integrated mobile health brigades. Using motorbikes or bicycles as their primary mode of transport, these paramedics can reach children in the most remote areas. With UNICEF’s support and training, almost 1,700 of these brigades are active in communities. Thanks to their services 653,000 children under the age of five have been screened for severe acute malnutrition, and thousands of lives have been saved with appropriate medical treatment and therapeutic feeding.

To further increase resilience, UNICEF and partners are supporting children with disabilities by providing them with psycho-social care, replacing their assistive devices and conducting community-based rehabilitation programmes. One thousand children have already benefitted from these interventions, but a lot of work remains to be done to fully integrate children with disabilities in the disaster recovery.

The cyclones, floods and drought have compromised water and sanitation facilities and led to the spread of diarrheal diseases such as cholera, to which children are particularly vulnerable. UNICEF and its partners managed to contain the outbreaks of cholera after both cyclones, by vaccinating more than one million people, and quickly restoring several urban water systems, including the one in Beira which supplies approximately 580,000 people. The accomplished rehabilitation of 507 contaminated water points and the construction of 80 new ones, efforts to better monitor the chlorification of drinking water, the distribution of 648,000 bottles of household water treatment chemicals, as well as the construction of latrines for 185,000 people will help to protect the population from future cholera outbreaks and other waterborne diseases. UNICEF has also established Water, Sanitation and Hygiene (WASH) facilities for over 61,000 people in 34 resettlement sites.

While UNICEF and its partners have ensured that primary education continued in temporary leaning spaces after the cyclones, the focus currently lies on the rehabilitation of school buildings. Using the “building back better” approach, UNICEF and partners will make sure schools and other damaged infrastructure, such as health centers, are being rehabilitated so that they are stronger and able to withstand flooding and strong winds, when the next cyclone approaches.