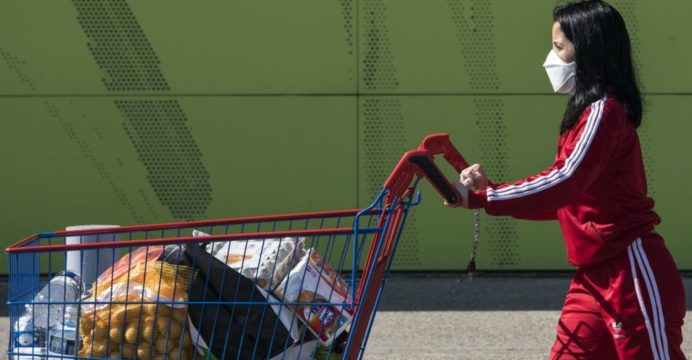 The European Commission is planning to ban all non-essential travel throughout Europe’s Schengen free-travel zone as more countries close their borders to try to limit the spread of coronavirus.

“The less travel, the more we can contain the virus,” she said.

“Concretely, all trips between non-European countries and EU countries will be suspended,” Mr Macron said in a televised address on Monday.

Long-term residents, family members of EU nationals and diplomats would be exempt as well as cross-border and healthcare workers and people transporting goods, Ms von der Leyen said during a video conference.

The measures would be in place for at least 30 days.

The Schengen agreement allows people to move freely between EU countries without border checks. Citizens of non-Schengen EU member states will also be invited to apply the travel ban, including the UK.

The comments came ahead a video-summit with EU leaders on Tuesday hosted by European Council chief Charles Michel.

Chancellor Angela Merkel has banned religious services and told people to cancel any domestic or foreign holiday travel. Most non-grocery shops and venues have been ordered to shut. Schools across the country have already been closed.

WHAT IS FRANCE DOING?

President Macron has ordered people to stay at home and only go out for essential duties. He said the previous measures, including the closing of schools, cafes and non-essential shops, had proved insufficient.

“Even while medics were warning about the gravity of the situation, we saw people get together in the parks, busy markets and restaurants and bars that did not respect the order to close,” he said in the 20-minute televised address.

“We are at war… we’re fighting neither another army nor our own nation. But the enemy is here, invisible, untouchable… and is advancing.”

The restrictions in France will be in place for at least 15 days, Mr Macron added, vowing to punish any infringement. The government later said more than 100,000 officers would be deployed nationwide to enforce the lockdown.

President Macron also said the army would be used to help transport the sick to hospital and that the second round of local elections this weekend was being postponed. He also offered reassurance to businesses, saying: “No French company, whatever its size, will be exposed to the risk of collapse”.

France has so far registered more than 6,000 infections and 148 deaths.

The country will close its land borders from midday (11:00 GMT) on Tuesday, Mr Macron said.

WHAT IS GERMANY DOING?

Chancellor Merkel announced that venues including clubs, bars, leisure facilities, zoos and playgrounds would be closed. Restaurants will have to enforce a minimum distance between tables and work under restricted hours.

“The better everyone sticks to these rules, the faster we’ll get through this phase,” she said at a news conference in Berlin, vowing that the government would try to minimise the economic impact of the outbreak.

Germany now has close to 7,000 confirmed cases of coronavirus, and 14 deaths. Large gatherings nationwide had already been banned.

Traffic crossing Germany’s borders with France, Austria, Switzerland and Luxembourg were on Monday restricted to goods and people commuting for work.

HOW ARE OTHER EUROPEAN COUNTRIES RESPONDING?

Spain implemented controls at land borders at midnight on Monday and only Spanish citizens, residents and special cases are allowed in the country.

The Spanish government imposed a partial lockdown on its 47 million inhabitants on Saturday, as part of a 15-day state of emergency. People are barred from leaving home except buy essential supplies and medicines, or for work.

Last week, the World Health Organization (WHO) said Europe was now the “epicentre” of the virus and urged governments to act aggressively to control the spread of Covid-19, the disease caused by the coronavirus.

The head of the WHO, Dr Tedros Adhanom Ghebreyesus, also told other countries to follow the containment strategies used in China and South Korea, saying they showed the pandemic was controllable.