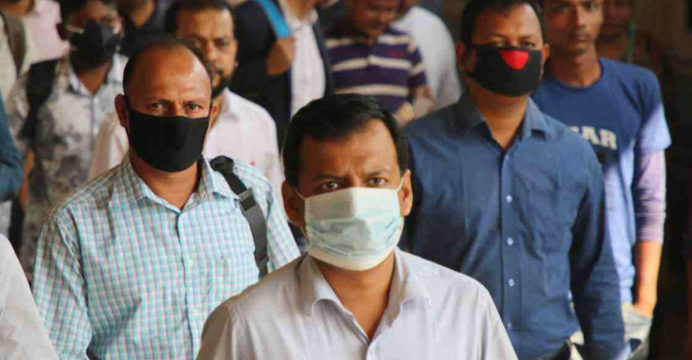 A total of 2,314 people have been kept in-home quarantine across the country so far under strict monitoring of local administrations, said Institute of Epidemiology, Disease Control and Research (IEDCR) today.

“A total of 2,314 people are in-home quarantine across the country and the local administrations are strictly monitoring them…We are also taking update information about them,” IEDCR Director Prof Meerjady Sabrina Flora told a press briefing at the IEDCR office in the capital’s Mohakhali area this noon.

A total of four people are in institutional quarantine while 10 are in isolation, 20, samples were tested in the last 24 hours and 63 people visited IEDCR directly for screening so far, she said, adding 231 patients were tested so far, including the infected five.

Of them, one came from Italy and another from Germany, both are male with one is 30-year-old and another is 40 plus. The older one is also suffering from diabetes and high blood pressure, she added.

The last diagnosis result of the third person, who was infected with the virus, came negative and the person is ready to go home, she said.

The further decision would be taken based on the screening report, Flora said.

Earlier on Saturday morning, 142 Bangladeshis arrived in Dhaka from Italy who was taken to the camp for detailed screening. They left there at night and were asked to be in-home quarantine for the next 14 days.

Discouraging people not to visit directly, Flora said, “We will collect samples from anywhere of the country, so people should not come here directly.”

Regarding shut down of schools, the IEDCR chief said, “The decision would come after an inter-ministerial meeting.”

She urged the people to offer their prayers at home instead of mosques if they suffer from fever, cough, running nose or any other cold or respiratory-related problems.