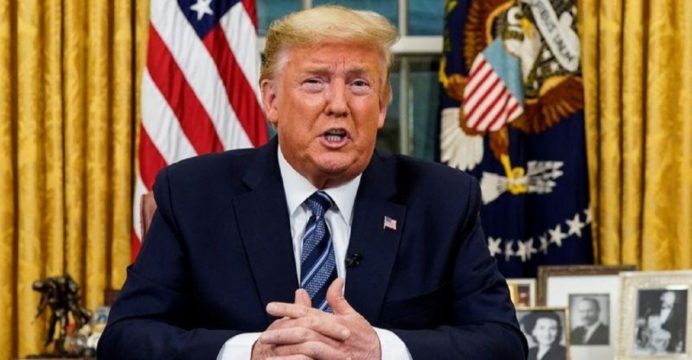 US President Donald Trump has announced sweeping new travel restrictions on Europe in a bid to combat the spread of the coronavirus.

In a televised address, he said travel from 26 European countries would be suspended for the next 30 days, reports BBC.

But he said the “strong but necessary” restrictions would not apply to the UK, where 460 cases of the virus have now been confirmed.

There are 1,135 confirmed cases of the virus across the US, with 38 deaths.

“To keep new cases from entering our shores, we will be suspending all travel from Europe,” Mr Trump said from the Oval Office on Wednesday evening.

“The new rules will go into effect Friday at midnight,” he added. The travel order does not apply to US citizens.

Mr Trump said the European Union had “failed to take the same precautions” as the US in fighting the virus.

A Presidential Proclamation, published shortly after Mr Trump’s speech, specified that the ban applies to anyone who has been in the EU’s Schengen border-free area within 14 days prior to their arrival in the US.

This implies that Ireland is excluded from the ban as it is not one of the 26 Schengen countries. Bulgaria, Croatia and Romania are also EU members without being part of the Schengen area.

Mr Trump spoke just hours after Italy – the worst affected country outside China – announced tough new restrictions on its citizens. It will close all shops except food stores and pharmacies as part of its nationwide lockdown.

He said the travel suspension would also “apply to the tremendous amount of trade and cargo” coming from Europe into the US. But he later tweeted to say that “trade will in no way be affected” by the new measures.

Mr Trump also announced plans to provide billions of dollars in loans to small businesses, and urged Congress to pass major tax relief measures in an attempt to stymie the effect of the coronavirus outbreak on the economy.

“We are marshalling the full power of the federal government and the private sector to protect the American people,” he said.

WHAT’S THE SITUATION IN THE US?

Officials had said the risk of infection was low for the general US public, but concern deepened after a number of new cases were confirmed earlier this month.

Containment efforts have begun in earnest. Troops have been deployed to New Rochelle, just north of New York City, where one outbreak is believed to have originated.

The National Guard will deliver food to some individuals who have been told to self-isolate there.

The governor of Washington state has also banned large gatherings in several counties. The north-western state is the focal point of the outbreak in the US, accounting for 24 of at least 38 deaths across the country.

And in an unprecedented move, the National Basketball Association (NBA) announced that it would suspend the season after Wednesday night’s games. The decision came after one player for the Utah Jazz tested positive for the virus.

Shortly after the NBA announcement, the Oscar-winning actor Tom Hanks announced that he and his wife had contracted the virus in Australia.

Dr Anthony Fauci, director the National Institute of Allergy and Infectious Diseases, told Congress that the outbreak is “going to get worse”, and that depended on the ability to contain those infected.

High medical costs make the virus particularly problematic – many Americans avoid doctor’s visits because of unaffordable charges. A lack of paid sick leave is another concern, as are fears about the number of available tests.

But Vice-President Mike Pence, who is in charge of the task force co-ordinating the response to the crisis, has said that “any American can be tested, no restrictions, subject to doctor’s orders”, and that insurers had promised to offset the charges.

WHAT ABOUT THE REST OF THE WORLD?

Earlier on Wednesday, the World Health Organization (WHO) said the outbreak was a pandemic. This is defined as a disease that is spreading in multiple countries around the world at the same time.

WHO chief Dr Tedros Adhanom Ghebreyesus said the number of cases outside China had increased 13-fold in two weeks. He said he was “deeply concerned” by the “alarming levels of inaction”.

He said the majority of shops as well as bars, hairdressers, restaurants and cafes that could not guarantee a metre’s distance between customers would close until 25 March.

Italy has more than 12,000 confirmed cases and a death toll of 827. Nearly 900 people with the virus in Italy were in intensive care, the WHO said.

Elsewhere, Denmark – which has 514 confirmed cases, up 10-fold since Monday – is to close all schools and universities from Friday. The government also urged the cancellation of events with more than 100 people attending.

India suspended most visas for foreigners until 15 April and Guatemala banned European citizens from entering from Thursday.

Meanwhile, the UK is expected to switch to tactics aimed at delaying the spread of the virus rather than containing it.