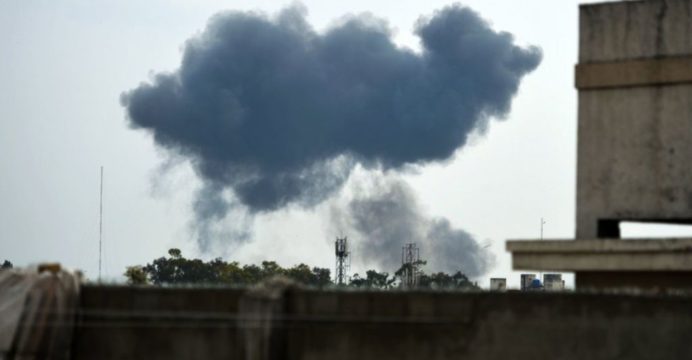 A Pakistan Air Force (PAF) F-16 fighter jet has crashed near a park in the capital Islamabad, killing the pilot.

In a statement, the PAF said the aircraft was carrying out rehearsals for the 23 March national day parade.

Police and security forces swiftly cordoned off the site in the Shakarparian area, near several museums, golf clubs and Jinnah Stadium, reports BBC.

The PAF said the pilot Wing Commander Noman Akram died in the crash. What caused it was not immediately clear.

The air force said it had ordered an inquiry.

Footage posted on social media, seemingly shot from nearby buildings, showed the moment the plane came down and smoke and flames billowing into the sky.

“Pakistan Air Force reports with regret that a PAF F-16 aircraft crashed near Shakarparian, Islamabad during the rehearsals of 23 March parade,” the air force said in its statement.

It added that “a board of inquiry has been ordered by Air Headquarters to determine the cause of the incident”.

Pakistan has a chequered aviation safety record, including a number of airliner crashes.

Last year a small military plane crashed into a residential area near Rawalpindi, which neighbours Islamabad. At least 18 people were killed and several injured .