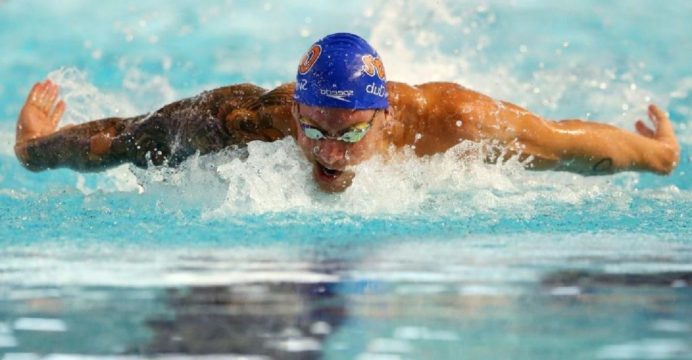 World record-holder Caeleb Dressel finished strong to win the 100m butterfly at the Pro Swim Series in Des Moines, Iowa, on Friday in a world-leading 50.92sec.

Dressel, whose record eight medals at the 2019 World Championships included six golds, notched his first win of the meeting, a stepping stone toward the US Olympic trials and the Tokyo Games, reports BSS.

Although he had missed the “A” final in the 100m free on Thursday, Dressel, competing without significantly breaking his training for the trials, said he was “in a good spot physically.

“We can always figure some mental stuff out to get a little edge,” added the American, who ran down compatriot Michael Andrew on the closing lap to claim the victory.

Katie Ledecky continued her dominant week, clocking 1:54.59 to demolish the field in the women’s 200m freestyle.

“It’s exceeded my expectations,” Ledecky said of her performance in Des Moines, where she has also won the 1,500m free and 400m free.

“I figured I’d have a good meet given how great training is going, but you really never know coming into a meet like this if you’re going to be completely dead from training, or if it’s going to start showing.”

Ledecky, a distance great who stretched her range to nab 200m free gold at the Rio Olympics along with 400m and 800m free victories, said the event was just as important to her as the longer races.

“It’s just as high up as any of the other events, if not more given that we’ve got a relay fight on our hands this year,” she said.

Rio Olympic gold medalist Ryan Murphy won the men’s 200m backstroke in 1:55.22, the fastest time in the world this year.