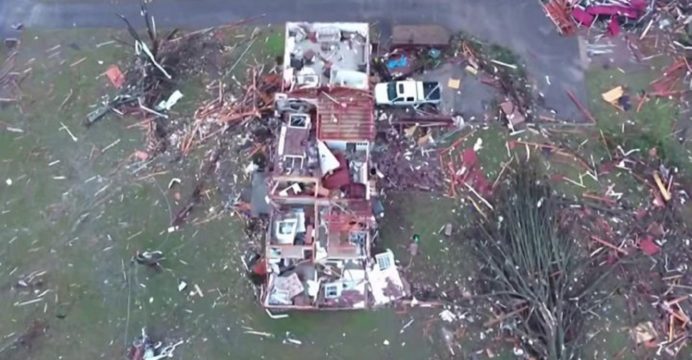 The death toll from two tornadoes that ripped through central Tennessee has risen to 25, the state’s Governor William Lee said on Tuesday.

The storm hit after midnight and moved so quickly that many people sleeping didn’t have time to take shelter, US media reports.

President Donald Trump has said he plans to visit the state on Friday.

A number of people remain unaccounted for, Governor Lee said in a press conference.

The scene in Nashville is “like a war zone” one resident told the BBC.

Two others, David Haskell and his wife, sprinted into a storm shelter when emergency alarms went off on their phones.

Much of the damage is centred in Putnam County – 80 miles (130km) east of Nashville – where 19 deaths have been reported so far.

In Wilson County, three people are reported to have died, as well as two people in Davidson County and one in Benton.

Nashville Mayor John Cooper said the city was “devastated”, and urged people to “lend a helping hand” to neighbours.

“It is an ongoing search and rescue right now,” the state’s Emergency Community Relations Officer Maggie Hannan told the BBC.

About 44,000 people have been left without power, Nashville Electric said.

There was also “significant damage” to John C Tune Airport, about eight miles from the city centre, the airport said.

Police in the Mt Juliet suburb, east of Nashville, said: “There are gas lines that are leaking, power lines that are on the ground, and multiple emergency responders are responding to those who are injured.”

Nashville’s Emergency Operations Centre said it had opened a shelter with running water in a farmers’ market to help displaced residents.

The city’s schools, courts and transport lines will be closed on Tuesday due to the damage, officials said.

Election polling sites located at schools will be open, but four polling stations have been moved.