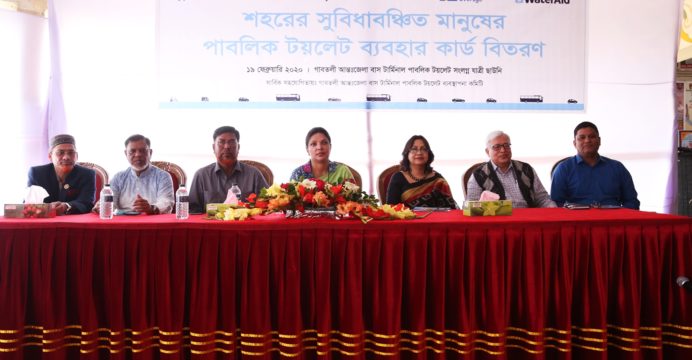 Dhaka is the the second fastest growing megacity in the world where 40% of the city’s population are slum-dwellers​1; each year approximately half a million inhabitants are added to the city’s population where they settle in slum areas. Services and facilities in these slums are minimal, depriving them of life’s basic rights, one being water and sanitation. Alongside these urban communities, commuters and pedestrians also face the daily struggles of lack of good public sanitation services. Women, children, and people with disabilities are most vulnerable under such circumstances.

Through the launch of this card, WaterAid, DNCC, DSK and and Gabtoli inter-district bus terminal public toilet management committee will provide a group of marginalised people with free access for water and toilet facilities in any of the 29 public toilets that WaterAid in collaboration with DNCC and DSCC have constructed over the past 5 years. Starting from the Gabtoli public toilet, the card will soon be distributed in all other areas where the public toilets are currently operational.

While access to water and sanitation is a human right, there are millions of marginalised people in Dhaka and all over the country who are still unable to access their rights due to the lack of facilities or due to the user fee/cost that comes associated with such public services. Through this card, the managing organisations believe that people will not only start using these unconventional and inclusive public toilets, but will also start to become more aware of what they deserve as their principal right. Besides, this initiative will also contribute in achieving the 6.1 and 6.2 Sustainable Development Goal (SDG) targets of Bangladesh government.