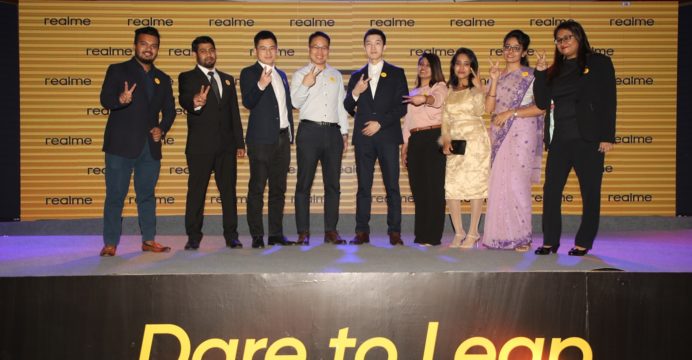 realme, the fastest growing smartphone brand, has made its step into Bangladesh mobile market. A brand launch event was held at Radisson Blu Dhaka Water Garden on Monday to officially announce their arrival.

In the occasion, Tim Shao, Managing Director, realme Bangladesh, said, “In realme, we offer technological advancement to the market with our mobile phones and services. We are committed to bring products to accommodate the daily needs of the tech-based youth community.”

Regarding their entrance to the Bangladeshi mobile market, Tim Shao expressed his plans saying from the very beginning, ‘Made in Bangladesh’ smartphones will be marketed. A factory in Gazipur has already been set up to facilitate this endeavor.” Among others, Neon Xie, Branding Director, South-East and South Asia Region, Mr. Rimon, Factory Director, Tahmidul Alam, Channel Manager, Zuhana Islam Tisha, Event Manager also attended the brand launching event. In the event, it was announced that Bangladesh-made realme phones will be available in the market from the middle of next month.

Adhering to the spirit of ‘Dare to Leap’, realme possesses deep insight of global smartphone market and the needs of the young users and bringing products with astonishing experience beyond expectation. Globally realme has launched 9 smartphone models including realme 3 series, realme 5 series, realme C series and realme X series. These products have won over 60 world-renowned awards throughout 2019. Widely recognized in terms of both brand concept and product experience, realme has created a benchmark not only for outstanding performance, but also for fashionable design.

Throughout their journey realme has globally launched 9 smartphones, including realme 3 series, realme 5 series, realme C series, and realme X series. These phones have earned over 60 international awards in 2019, which brought them worldwide recognition.

In just 18 months since its emergence in the tech market, realme has reached Top 7 in the global smartphone shipments ranking and became the fastest growing smartphone brand around the world. By the end of 2019, global users have exceeded 25 million with a year-on-year increase by over 500%. Meanwhile, realme has quickly entered 25 markets around the world, and gradually completed the overall layout of the global strategic market and recently reached top 5 mobile companies.

realme holds a position of popularizer of 5G and brings affordable and trendy 5G smartphones for the youth. The company has built a close cooperation with the supply chains represented by Qualcomm, enabling it to offer global consumers with the most advanced technologies and products promptly. In the months of January and February 2020, realme has already launched two 5G enabled smartphones: realme X50 and realme X50 Pro.

With trendy products which allow strong performance at a fast-growing speed, equipped with premium hardware-software synchronization and service, realme will be a pioneer in the trendy tech-lifestyle to the young generation of Bangladesh.