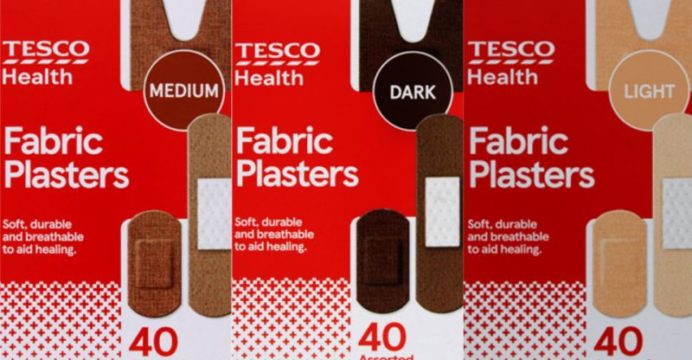 Tesco to stock plasters in a variety of skin tones

Tesco, is stocking plasters in a variety of skin tones as it tries to give a better reflection of racial diversity.

It said the plasters, which come in light, medium and dark shades, would “better represent the nation”.

The retailer said they were developed in response to an emotional tweet from a US man, who used a plaster matching his skin tone for the first time, reports BBC.

Tesco said it was the first UK supermarket to make such a move.

People welcomed the news on Twitter, although some questioned why it had taken so long.

Campaigner Sajda Mughal tweeted: “This is like that feeling as a WOC [woman of colour] growing up not being able to find the right tone of foundation apart from pink!!!… And finally somebody introduces it!!!”

Nicola Robinson, Tesco’s health, beauty and wellness director, said: “As one of the largest retailers in the UK, we understand that we have a responsibility to ensure our products reflect the diversity of our customers and colleagues.

“We believe the launch of our new skin tone plaster range is an important step and a move that we hope will be replicated by other retailers and supermarkets across the country.”

The supermarket giant developed the plasters after a tweet from Dominique Apollon, of US racial equality advocacy group Race Forward, went viral.

Mr Apollon said he was overwhelmed after using a plaster matching his skin tone for the first time, and “holding back tears”. It prompted more than 100,000 retweets and comments.

Currently, people have little choice when it comes to buying plasters of diverse shades on the High Street. Boots does not stock plasters in multiple shades, although it does offer transparent ones.

Specialist brands are available online but can be expensive.

Tesco, which is the UK’s biggest seller of own-brand plasters, said its new plasters would be available at all of its 741 UK stores.

Superdrug told the BBC it will also be launching plasters for dark tone, medium tone and light tone skin in six weeks’ time across all of its stores. Boots also said it plans to launch plasters in a range of tones.

“Not only is it the right thing to do but there is demand,” she said.

“Companies in the cosmetic industry realised the importance of producing products different skin tones years ago, though you’ll also find plenty of blogs and posts explaining they haven’t done enough.

“Some fashion retailers have considered their ranges, especially extending their ‘nude’ ranges beyond pale, be that shoes, tights or underwear.

“Supermarkets are very competitive when it comes to the sustainability agenda and it would be great to see more examples like this coming through.”