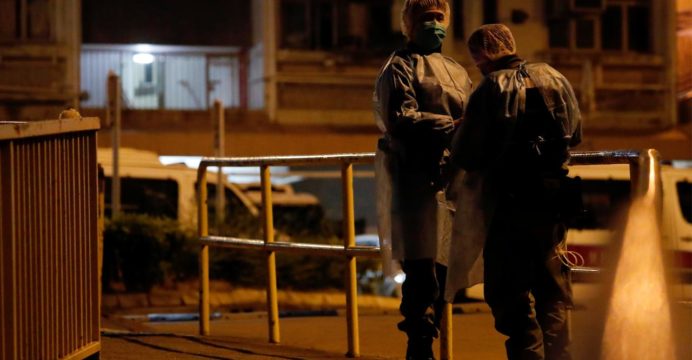 A Hong Kong police officer confirmed infected with the coronavirus

A Hong Kong police officer has been confirmed infected with the coronavirus, authorities said on Friday, the first officer to test positive in the Asian financial hub as dozens of other officers were quarantined over concerns of contagion.

The 48-year-old officer had attended a banquet with 59 other police in the city’s western district on Feb 18. Everyone who attended is now quarantined, according to a statement on the official Facebook page of the Hong Kong Police, reports Reuters.

“The police are highly concerned about the incident and are actively cooperating with the Department of Health,” the statement said.

Hong Kong has 69 confirmed cases of the virus and two deaths so far. Recent virus cases have included a fast food restaurant worker and a taxi driver, both of whom were exposed to many other people, authorities said.

Local lawmakers are expected to discuss a HK$30 billion ($3.85 billion) relief package on Friday to support small- and medium-sized businesses and the Hospital Authority, which are struggling to cope with the outbreak.

The former British colony’s economy has been hit hard as tourist arrivals slump and residents keep away from shops, miring the city in its first recession in a decade.

Leader Carrie Lam’s handling of the crisis has stirred anger, with critics calling on her to close the entire border with mainland China and some medical workers going on strike.

Lam has said a full shutdown of the border would be impractical, inappropriate and discriminatory.

More than 100 Hong Kong residents who were passengers on the virus-stricken Diamond Princess cruise ship in Japan are expected to return to Hong Kong on government charter flights on Friday night or Saturday. The first batch of 106 passengers arrived in the Chinese territory on Thursday.

Authorities said 66 of the 364 Hong Kong residents on the ship were infected with the coronavirus, SARS-CoV-2. They will remain in Japan along with 41 other citizens who were in close contact with them.