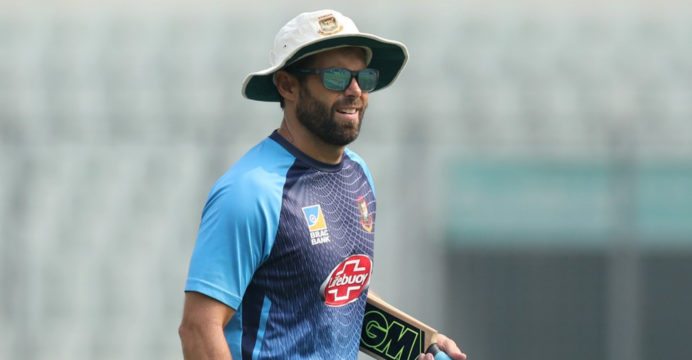 Bangladesh’s batting consultant Neil McKenize came down heavily on the batsmen for their poor show in the T20 series in Pakistan, stating that the batsmen lacked the hunger and fearlessness required for the success.

McKenzie who opted against touring Pakistan tour and has been working with Bangladesh Test specialist to prepare them for the first Test against Pakistan, said, the batsmen need to show more intent and hunger as well as sometimes they would have to be selfish for team’s purpose not for their own purpose.

McKenzie, who is originally the batting consultant for white-ball cricket, did not hesitate to express his disappointment by the fact that some of the members of the national team are just happy to be part of the team without having any big goal to achieve.

Bangladesh’s lackluster batting show saw them to be restricted 141-5 and 136-6 in the first two T20 matches against Pakistan. Bangladesh lost both of those matches by five wickets and nine wickets respectively to concede the three-match T20 series.

“We need more consistency and I want someone to be selfish in terms of winning games for Bangladesh and not selfish for their own right,” McKenzie said here today while talking to the journalists at the Sher-e-Bangla National Cricket Stadium.

”If I get an 80, why can’t I score 140 and score 200? I think I want them to be more selfish and more hungry probably selfish is a wrong word. I want them to be hungry for consistency because a lot of the time guys are happy to play their next game by just scoring 40 runs and that’s the wrong mentality,” he added.

”I want guys to be the best batsman in the world and that’s what we are trying to install and but it’s been frustrating [the way the things have been panning out],” he said.

The fact is that despite the slow start by the openers, Bangladesh got a platform which the middle order couldn’t capitalize on-a thing that made McKenzie frustrated as he questioned about the intent of the batsmen.

“There’s lot of inexperience in the squad at the moment. We knew that was going to be the case before we got there, but still it is disappointing,” McKenzie said.

“I think we missed out on a good start the other day (in the first T20I). What’s been disappointing for me has been the intent.

We have been working so hard in the last couple of years on rotation of strike, putting the bowler under pressure, where you are standing, making him bowl to where you want him to bowl, but I haven’t seen too much of those in the last T20s.” The former South African opener also saw a lack of fearlessness in batsmen’s mentality.

“The intent, looking to be a little bit more hungry, really playing with that ‘no fear’ that Russell and everybody tries to instill in the players. It is human nature. You have a few young guys and some guys who are getting back. There’s a lot of pressure on the guys to perform and stay in the side, which is understandable, but hopefully they all understand that they are getting the backing from all the selectors and coach. They just have to go out there and play,” he added.

McKenzie said that with so many top-order batsmen in the squad, Bangladesh don’t have the required experience and expertise in the middle order which looked vulnerable with the absence of Shakib Al Hasan and Mushfiqur Rahim.

“It is a different skill to bat at No 4, 5 and 6. You are on 0, and all of a sudden you are facing a quality spinner. It is a different mindset. You have to know your game, try to rotate the strike and then go with your boundary options,” he concluded.