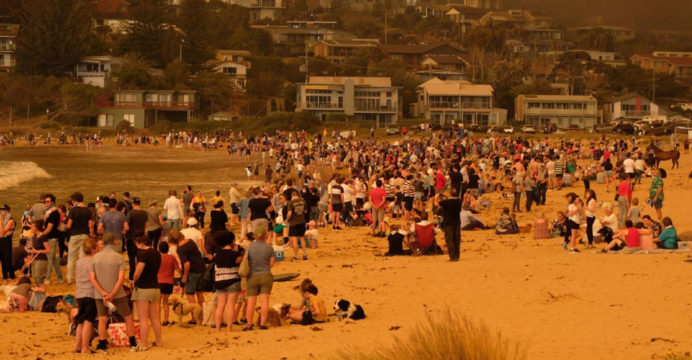 Thousands of holidaymakers and locals were trapped on a beach in fire-ravaged southeast Australia Tuesday, as blazes ringed a popular tourist area leaving no escape by land.

As many as four thousand people are trapped on the foreshore of the encircled seaside town of Mallacoota, as smoke turned day to night and the authorities said nearby fires were causing extreme thunderstorms and “ember attacks”.

“We’ve got a fire that looks like it’s about to impact on Mallacoota,” Victoria’s Emergency Management Commissioner Andrew Crisp told public broadcaster ABC, adding that firefighters have been deployed to protect the group.

Authorities had for days been warning up to 30,000 tourists enjoying Australia’s summer holidays to leave the area, which is just one of the hundreds ravaged by this devastating bushfire season.

“We’ve got three strike teams in Mallacoota that will be looking after 4,000 people down on the beach there,” Crisp said. “We’re naturally very concerned about communities that have become isolated.”

Preparations were reportedly under way for a sea or airborne evacuation if needed.

On social media, residents said they were putting on life jackets in case they need to seek refuge from the fire in the water.

Temperatures in bushfire areas can hit hundreds of degrees Celsius (Fahrenheit) killing anyone nearby, long before the flames reach them.

The ocean is a “last resort option” according to Victoria’s emergency management agency.

Local radio journalist Francesca Winterson said she was watching the fire approach the town and her own home while she tried to broadcast emergency warnings amid a powercut.

“I’d rather be alive than have a house,” she told ABC Gippsland.

To the north, on the New South Wales coast, holidaymakers were also warned that several “dangerous” blazes were moving quickly and they should seek shelter on beaches if necessary.

“These fires moved quickly this morning. They pose a serious threat to life. Do not be in their path. Avoid bushland areas. If the path is clear, move to larger towns or beaches to take shelter,” New South Wales Rural Fire Service said.