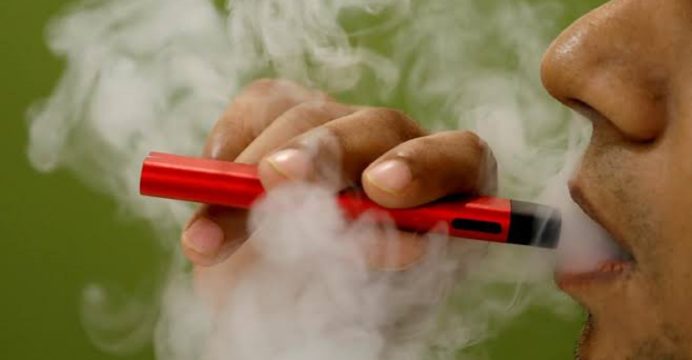 The study, published in the American Journal of Preventive Medicine, is among the first to show the potential long-term harms of using e-cigarettes, which are often promoted as a safer alternative to tobacco and a means of helping smokers quit, reports Reuters.

It found that e-cigarettes increased the risk of lung disease by a third compared with those who never smoked or vaped. And the risk was even higher among adults who used both e-cigarettes and smoked tobacco.

The research comes as the United States faces a youth vaping crisis. According to the U.S. Centers For Disease Control and Prevention (CDC), more than 27.5% of high school students in the United States use e-cigarettes, up from 20.7% in 2018.

“E-cigarettes are promoted as harmless and they’re not,” Stanton Glantz, director of the University of California San Francisco Center for Tobacco Control Research and Education, said.

Glantz and colleagues used data on 32,000 adults surveyed in the CDC’s Population Assessment of Tobacco and Health (PATH), which tracked e-cigarette and tobacco habits, as well as new lung disease diagnoses from 2013 to 2016.

Nobody had lung disease at the start of the study. Three year later, researchers found that people who used e-cigarettes had roughly a 30% increased risk of developing lung diseases, such as asthma, bronchitis, emphysema or chronic obstructive pulmonary disease (COPD) compared to those who never smoked or vaped.

Those who smoked cigarettes had roughly double the risk of chronic lung disease compared to whose who never smoked. For those who smoked traditional and e-cigarettes, the risk more than tripled, the study found.

“Everybody, including me, used to think e-cigarettes are like cigarettes but not as bad. If you substitute a few e-cigarettes for cigarettes, you’re probably better off,” Glantz said. “It turns out you’re worse off,” he said. “E-cigarettes pose unique risks in terms of lung disease.”

Prior studies have only looked at a cross section of the population at a fixed point in time.

The new study is considered more robust because it looks at risks to the lungs over time, Robert Tarran, a physiologist and vaping expert at the University of North Carolina School of Medicine, said in an email.

“This study adds to the growing body of evidence that demonstrate that vaping is not safe,” Tarran said.