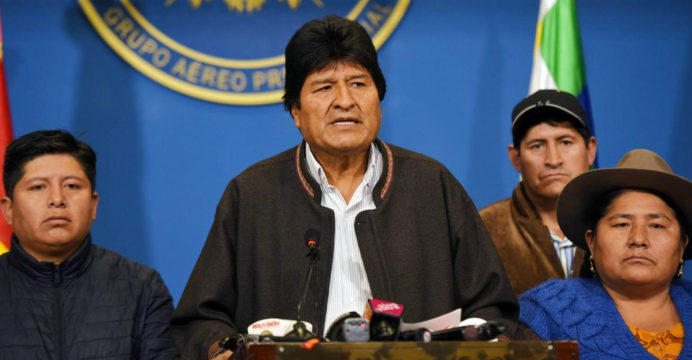 Mexico on Sunday said it was offering asylum to Bolivia’s President Evo Morales after 20 government officials and lawmakers had sought refuge at its embassy in La Paz.

“Mexico, in accordance with its tradition of asylum and non-intervention, has received 20 personalities from the Bolivian executive and legislature in the official residence in La Paz, so we would also offer asylum to Evo Morales,” Foreign Minister Marcelo Ebrard said on Twitter.

Led by Mexican President Andres Manuel Lopez Obrador, the government delivered a strong defense of Morales, who said on Sunday that he would resign after the country was rocked by protests over a disputed election and the military called on him to step down.

“We recognize the responsible attitude of the president of Bolivia, Evo Morales, who preferred to resign rather than to expose his people to violence,” Lopez Obrador wrote on Twitter, adding that the Mexican government would explain its views in more detail on Monday.

Mexico was among the first countries to congratulate Morales after his victory in late October, despite questions surrounding the results.