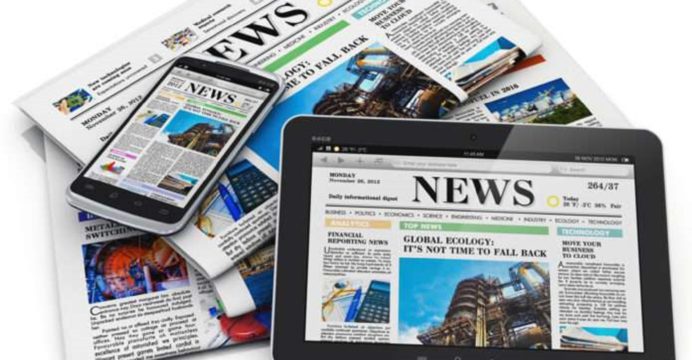 Hinduism is the one of the religions today that accepts and respects all the other religions and Hindus are descendants of an ancient civilization in human history, but there are many western journalists and correspondents who are still biased against Hindustan (Bharat or India).

So said Francois Gautier, an India based senior French journalist, during an interactive session with Guwahati based scribes on 26 October 2019 through video-conferencing and asserted that the western media should at least respect the country with the wisest past and still gives birth to humans with wonderful qualities.

“But most of the western correspondents posted in New Delhi take little notice about the uniqueness of India paying almost no respect to the billion-plus nation even after 70 years of its independence. They are supposed to report honestly about India so that their readers, many of whom are ignorant about the great nation, get enlightened,” said Gautier.

Himself a regular contributor to various international publications including few from France, Gautier argued that the foreign correspondents are normally assigned for four to five years in India and that is not enough for understanding a country which is so vast, diverse and also contradictory.  More precisely, Delhi is very far from southern or eastern India.

Shockingly, the Indian journalists who regularly write for western media outlets normally follow the guidelines of their editors and very often they don’t hesitate to paint a negative image of their own country exclaimed Gautier. However, he feels that the alternate media has provided space for many Indians, including qualified journalists, to speak on various issues they deem fit for exposures.

“India is never in the news in the West unless there is some major catastrophe or huge elections. Thus, if anyone wants to write for those publications, he or she has to find stories that might often border on the sensational, marginal and even misleading,” commented the outspoken journalist, who is living in India for many decades now.

Speaking about Hindu tolerance, Gautier opined that it has been an one-way traffic for the Hindus as they experienced cruel genocides in the sad history of humanity. But Hindus have shown extreme tolerance and Hinduism is the only religion that never tried to convert others. However many Indian intellectuals claim that Hindus are intolerant, fanatic or fundamentalists.

India’s first Prime Minister Jawaharlal Nehru was a great admirer of English socialism and he adopted British constitutional, judicial and even education systems without considering the exceptional Indian socio-cultural and traditional values. Nehru had to nurture the sentient of a sizable Muslim population that did not join Pakistan (west or east) and continued to live in India.

“For these reasons, Nehru asked historians to show esteem to Muslim rulers like Akbar or Aurangzeb and ignore the greatness of Hindu warriors like Chatrapati Shivaji, Maharana Pratap, Rani Lakshmibai etc knowing that Hindus would not react not to speak of protesting,” commented the contributor to Journal de Geneve, Le Figaro, La Revue de l’Inde along with various Indian newspapers. Hence Gautier believes that the Indian history should be rewritten and he has reasons to explain. For over seven decades, the Indian establishment comprising people from Nehruvian-Marxist and pseudo-secular ideology used to influence everything from school curriculum to public policy to history writing.

It has built up a false narrative that systematically condemned India’s civilizational journey. Since the overwhelming majority of the people here remain Hindus, the establishment tried its best to turn itself as anti-Hindu. It encouraged people to negate anything associated with Hinduism. The tendency extended up to reproving the Vedas, Upanisad, Bhagavad Gita, Ramayana, Mahabharata along with Ayurveda and Sanskrit.

Bringing the reference to Hebrew, the ancient language of Israel, Gautier pointed out that Israeli people after getting a part of their holy land in 1948 started welcoming Jews from various parts of the world. As they came back to live in Israel a major problem was aroused because they spoke different languages. The Israeli authority asked their scholars to revive Hebrew, which had fallen in decrepitude so that everybody can speak Hebrew.

“Today the Hebrew language has unified Israel like nothing else, which should inspire India to revive Sanskrit. The government should invite some dedicated linguists to sit down with Sanskrit scholars for devising a way of simplifying and modernizing the mother all Indian languages. I am sure, it would energize and revitalize the whole Indian culture” stated the author of ‘India’s Self Denial’, ‘Sri Sri Ravi Shankar, a Guru of Joy’, ‘A New History of India’, ‘A History of India as it Happened’ etc

Married to an Indian woman, Gautier also argued that India and Israel share so much in common and both can learn a lot from each other! Hindus and Jews, far from being the persecutors of minorities have been persecuted for nearly two thousand years and have been the victims of worst genocides in history. While the German dictator Hitler murdered six million Jews in his gas chambers, Gautier revealed eighty million Hindus had to die at the hands of Muslim invaders.