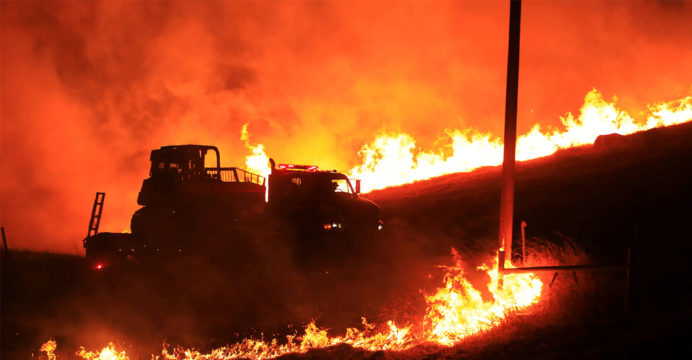 The so-called Kincade Fire, north of San Francisco, has spread to 30,000 acres (12,000 hectares) and was only 10 percent contained by Sunday evening, state fire authorities said.

The blaze, the largest of more than a dozen wildfires burning throughout the state, has destroyed dozens of homes and wineries, including the iconic Soda Rock Winery built-in 1869.

“We’ve seen the news. We are devastated,” the owners said in a Facebook message, adding that all staff at the winery — located in the town of Healdsburg, 70 miles north of San Francisco — are safe.

The Kincade Fire — the most devastating in California this year — ignited Wednesday and spread quickly thanks to powerful wind gusts up to 90 miles per hour (145 kilometers per hour).

Governor Gavin Newsom declared a statewide emergency on Sunday due to the “unprecedented” high winds that significantly raise the risk of fires.

“We are deploying every resource available, and are coordinating with numerous agencies as we continue to respond to these fires,” Newsom said in a statement. “It is critical that people in evacuation zones heed the warnings from officials and first responders, and have the local and state resources they need as we fight these fires.”

An estimated 180,000 people were under mandatory evacuation orders, including in parts of Santa Rosa and a large swath of Sonoma County all the way to the Pacific Ocean.