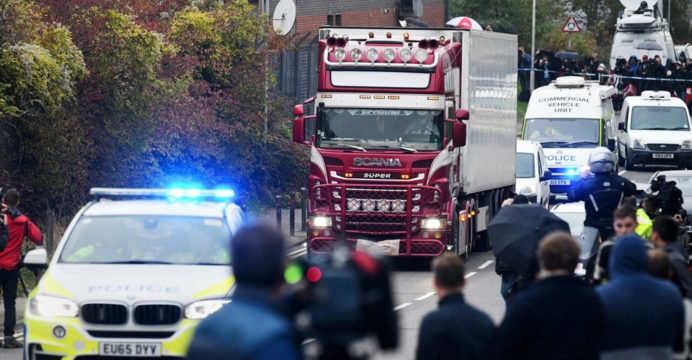 British police said on Thursday that 39 people found dead in a truck near London were all believed to be Chinese nationals, as officers conduct the country’s largest murder probe in more than a decade.

Emergency workers made the grisly discovery on early Wednesday inside the refrigerated container of a truck parked in an industrial area east of London, shortly after it had arrived on a ferry from Belgium.

The case has triggered shock and outrage in Britain, with Prime Minister Boris Johnson describing it as an “unimaginable tragedy”.

The local police force said in a statement that eight of the dead were women and 31 were men.

“All are believed to be Chinese nationals,” Essex Police said.

China’s foreign ministry said its embassy staff in London were heading to the scene “to verify this situation”.

The grim discovery has drawn attention to the shadowy people trafficking business and efforts to stem the flow of illegal migrants to Britain.

Police also confirmed that officers had searched three properties in Northern Ireland overnight in connection with the investigation.

The addresses are believed to be linked to the truck driver, a 25-year-old man from the province, who was arrested at the scene in Grays, east of London.

“We arrested a man on suspicion of murder, who remains in custody,” police said, adding that they were not identifying him.