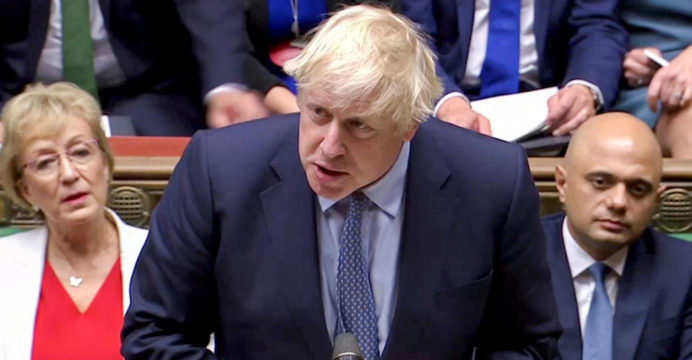 UK PM Johnson will ask for Brexit extension if no deal by October 19, court told

British Prime Minister Boris Johnson will send a letter to the European Union asking for a Brexit delay if no divorce deal has been reached by Oct. 19, the government acknowledged for the first time on Friday.

With the clock ticking down to Britain’s departure date of Oct. 31, Johnson has consistently said he will not ask for a Brexit extension, but also that he will not break a new law that forces him to request one if no withdrawal agreement deal has been agreed.

He has not explained the apparent contradiction in his comments and opponents say they believe he will seek some kind of legal escape route or try to pressure the EU into refusing to agree to an extension request.

On Wednesday, Johnson submitted new proposals to the EU that he hopes will lead to an agreement, although the EU has responded with scepticism saying more concessions are needed if a no-deal Brexit is to be avoided.

Just over a week after a British Supreme Court ruling that Johnson had suspended the parliament unlawfully and weeks before the deadline, anti-Brexit campaigners again turned to judges to try to ensure the exit will be delayed if no deal to smooth the transition has been agreed.

They filed two linked challenges to Johnson in Scotland’s senior courts, seeking an order forcing him to abide by the “Benn Act”. This was the law passed by parliament last month requiring Johnson to seek a Brexit delay if he has not agreed a withdrawal agreement in the next two weeks.

If he does not, they want the court to use its powers, not available to English judges, to write to EU leaders itself requesting an extension on his behalf.

While saying he will comply with the law, Johnson has said he would rather be “dead in a ditch” than ask for any delay and that Britain will leave the EU “do or die” on Oct. 31.