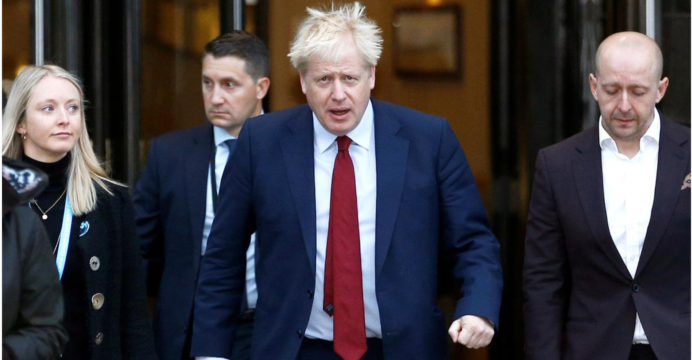 British Prime Minister Boris Johnson pitched new proposals on Tuesday for an amended Brexit agreement that would remove the contested insurance policy for the Irish border, but EU officials sounded skeptical about the chances of a breakthrough.

More than three years after the 2016 referendum, the United Kingdom is heading towards an Oct. 31 Brexit date without a clear understanding of whether it will leave with a deal, without a deal or even leave at all.

The tortuous Brexit negotiations have meanwhile led to fatigue in EU capitals, even among Britain’s traditional allies.

One EU diplomat cast Johnson’s approach as a “kamikaze” Brexit strategy. Another bluntly said that a new deal would be difficult to do swiftly if London demanded substantive changes.

“I would like to veil our proposals in decent obscurity until we have been able to share them properly with our friends,” he said, dismissing a report that London would propose customs posts either side of the Irish border.

Johnson says he wants to secure an amended agreement at an EU summit on Oct. 17-18, and that both sides are keen on a deal to allow an orderly Brexit. Many EU diplomats doubt a breakthrough is possible by the summit.

“We are sitting here every day ready to negotiate, the kamikaze way in which it is being treated by the UK government is not something we have chosen,” one EU diplomat said.

Another said a move “half an inch” from the current proposal to keep open the sensitive border between Ireland and British-ruled Northern Ireland would make a deal difficult.

In a moment of truth that will define the future of Brexit, the EU and his premiership, Johnson is betting he can get enough concessions from Brussels to persuade Brexit supporters in the British parliament to ratify any deal.

If he succeeds, Johnson will go down in history as the British leader who delivered Brexit. If he fails, a law has been passed by parliament forcing him to delay departure — a step that could destroy his popularity among “Leave” voters.

Johnson said on Tuesday “we are working flat out to get a deal” and denied speculation that he did not really want one, saying: “This is completely untrue – I really must stress it is the absolute inverse of reality.”