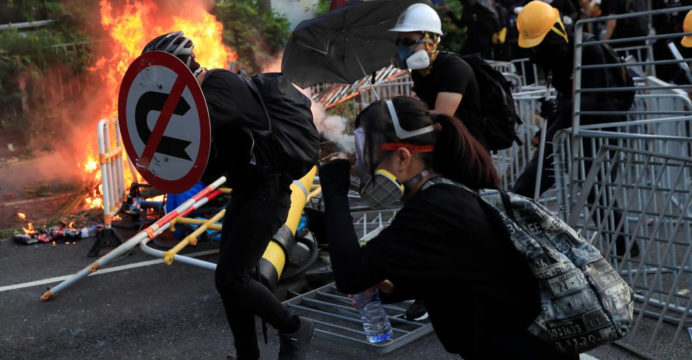 Hong Kong police fired tear gas and water cannon at petrol-bomb throwing protesters and shot a teenage demonstrator, as pro-democracy activists defied the city’s Chinese rulers on the 70th anniversary of the founding of the People’s Republic.

Cat-and-mouse clashes spread from the upmarket district of Causeway Bay to the Admiralty area that is home to government offices on Hong Kong island, with police vans chasing down pro-democracy protesters in the key drag of Hennessy Road.

Thousands of black-clad protesters, some wearing Guy Fawkes masks, marched on Admiralty, ignoring a police ban. Violence escalated across the harbor to Kowloon and beyond to the New Territories in the most widespread unrest in nearly four months.

“There are rioting acts across Kowloon, Hong Kong island and the New Territories,” police said in a statement.

Police said they shot an 18-year-old man in the shoulder in the Tsuen Wan area of the New Territories.

Nearly four months of street clashes and demonstrations have plunged the former British colony into its biggest political crisis in decades and pose the most serious popular challenge to President Xi Jinping since he came to power.

Protesters had vowed to seize the opportunity on China’s National Day to propel their calls for greater democracy onto the international stage, hijacking an occasion Beijing sees as an opportunity to showcase China’s economic and military progress.

“I’m not young, but if we don’t march now, we’ll never have the chance to speak again, it’s as simple as that,” said one marcher near Causeway Bay, a 42-year-old woman with her own logistics company who identified herself as Li.

Police said 31 people had been wounded across the territory on Tuesday, two critically, without giving details.