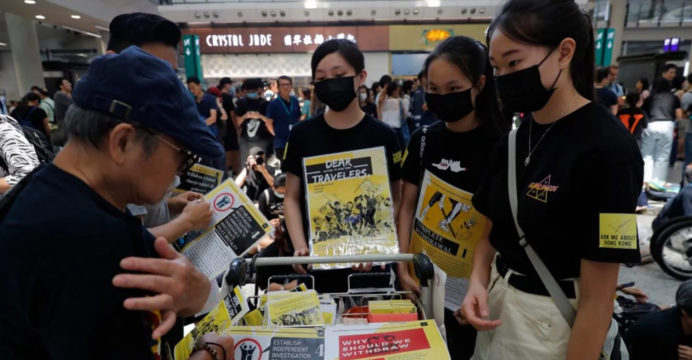 Hundreds of pro-democracy activists, some wearing face masks and helmets, staged a sit-in at Hong Kong’s airport on Friday hoping to win support from international visitors for their movement.

“No rioters, only tyranny,” the demonstrators chanted as they began a three-day action — the latest in a string of protests that have rocked the international financial hub for more than two months.

Protesters hold up a banner during a demonstration at the airport in Hong Kong on Friday, Aug. 9, 2019.

Activists, some dressed in the movement’s signature black, sat on the floor in the airport’s arrivals hall and held up signs in Chinese and English condemning police violence. “Save Hong Kong from tyranny and police brutality!” read one sign on a piece of cardboard.

“Ask me about Hong Kong” read signs in different languages attached to the sleeves of some of the approximately 1,000 people participating.

“We want to let more people know about what’s happening in Hong Kong,” said one protester, who asked to be identified only by her surname Choi.