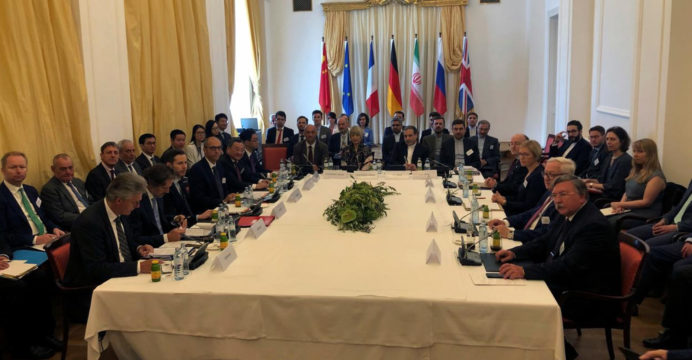 An emergency meeting with parties to Iran’s 2015 nuclear deal was constructive but there are unresolved issues and Tehran will continue to reduce its nuclear commitments if Europeans fail to salvage the pact, Iranian official Abbas Araqchi said on Sunday.

“The atmosphere was constructive. Discussions were good. I cannot say that we resolved everything, I can say there are lots of commitments,” Araqchi, the senior Iranian nuclear negotiator, told reporters after the meeting in Vienna.

Parties to the agreement – Britain, Germany and France plus Russia and China – met Iranian officials for talks called in response to an escalation in tensions between Iran and the West that included confrontations at sea and Tehran’s breaches of the nuclear accord.

“As we have said, we will continue to reduce our commitments to the deal until Europeans secure Iran’s interests under the deal,” Araqchi said.

The parties have been trying to salvage the pact since the United States withdrew from it in May 2018 and re-imposed and toughened sanctions on Iran, crippling an already weak economy.

The Europeans say further breaches of the agreement by Iran would escalate confrontation at a time when Tehran and Washington are at risk of a miscalculation that could lead to war.

However, their efforts to protect trade with Iran against the U.S. sanctions have yielded nothing concrete so far. Earlier this month, Tehran followed through on its threat to increase its nuclear activities in breach of the agreement.

Iran has said it will withdrew from the pact unless the Europeans find ways to shield its economy from the U.S. sanctions.