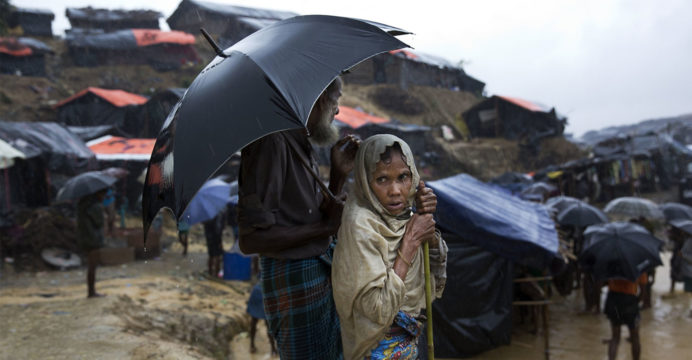 Three days of constant rain in the country have destroyed 273 houses and injured 11 people in the Cox’s Bazar settlements where more than 900,000 Rohingyas are currently living.

An estimated 350mm of rain fell in 72 hours from Monday and more heavy downpours are expected throughout next week, with four months of the monsoon season to go. According to preliminary reports, there have been 26 landslides, a UNHCR press release said here today.

Volunteers trained by UNHCR and allies worked throughout the night on Wednesday in heavy rainfall to help families in urgent need, the release quoted UNHCR spokesperson Charlie Yaxley.

In some cases, this involved rescuing Rohingyas from shelters destroyed by landslides.

“We have tentatively relocated 2,137 people, either because their shelters suffered substantial damage or as a precaution. Our network of Emergency Response Teams has been mobilized to identify the needs of the most vulnerable and prioritize them for assistance. As an immediate response, pre-positioned emergency supplies are being distributed to help rebuild, repair and strengthen damaged shelters,” Yaxley added.

In support of the humanitarian response led by the Bangladesh authorities, UNHCR and allies, including WFP and IOM, made preparedness for the monsoon season a priority, including building retaining structures on hillsides, installing drainage, and building roads and bridges. Reservoirs have been also constructed to hold monsoon rains and stabilize water supplies.