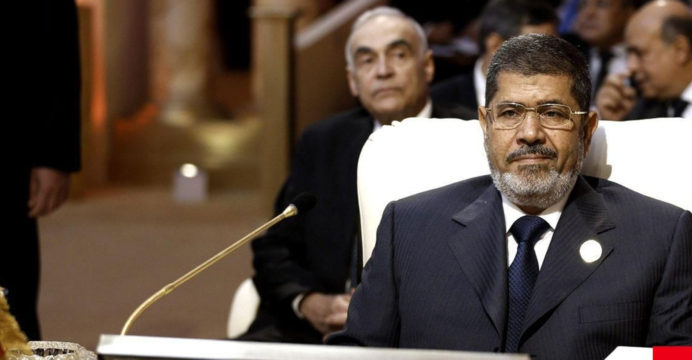 Egypt’s first democratically elected president Mohamed Morsi was buried Tuesday, as the UN-backed calls for an independent investigation into his death after he collapsed in a Cairo courtroom.

The Islamist, who was overthrown in 2013 after a year of divisive rule and later charged with espionage, was buried at a cemetery in eastern Cairo’s Medinat Nasr, one of his lawyers said.

That lies near the prison where Egypt’s first civilian president, a prominent Muslim Brotherhood member, had been held for six years in solitary confinement and deteriorating health.

The prosecutor general’s office said the 67-year-old had collapsed and “died as he attended a hearing” Monday over alleged collaboration with foreign powers and militant groups.

Abdel Maksoud said only around 10 family members and close Morsi confidants were at the funeral, including himself.

A handful of mourners were seen entering the cemetery, accompanied by police, but journalists were prevented from going in.

The graveyard is in the same suburb as the largest massacre in Egypt’s modern history, the August 2013 crackdown on Islamist sit-ins at two Cairo squares, weeks after Morsi’s ouster by the military.

Over 800 people were killed in a single day as security forces moved against protesters demanding Morsi’s reinstatement.

The attorney general’s office said Morsi, who appeared “animated”, had addressed the court for five minutes before falling to the ground inside the defendants’ glass cage.

Another Morsi lawyer, Osama El Helw, said other defendants had started banging on the glass, “screaming loudly that Morsi had died”.

The attorney general said Morsi had been “transported immediately to the hospital”, where medics pronounced him dead — a version of events backed up by a judicial source.