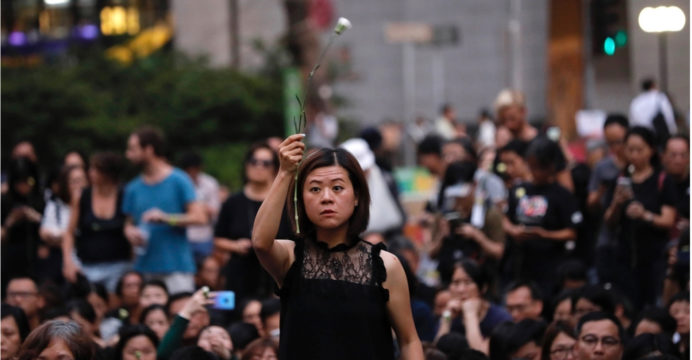 Hong Kong was braced for another mass rally Sunday as public anger seethed following unprecedented clashes between protesters and police over an extradition law, despite a climbdown by the city’s embattled leader in suspending the bill.

Organizers were hoping for another mammoth turnout as they vowed to keep the pressure on chief executive Carrie Lam, who paused work on the hugely divisive bill Saturday after days of mounting pressure, saying she had misjudged the public mood.

Critics fear the Beijing-backed law will tangle people up in China’s notoriously opaque and politicized courts and damage the city’s reputation as a safe business hub.

The city was rocked by the worst political violence since its 1997 handover to China on Wednesday as tens of thousands of protesters were dispersed by riot police firing tear gas and rubber bullets.

Lam stopped short of committing to permanently scrapping the proposal Saturday and the concession was swiftly rejected by protest leaders, who called on her to resign, permanently shelve the bill and apologize for police tactics.

Nearly 80 people were injured in this week’s unrest, including 22 police officers, and one protester died late Saturday when he fell from a building where he had been holding an hours-long anti-extradition protest.

He had unfurled a banner saying: “Entirely withdraw China extradition bill. We were not rioting. Released students and the injured”.

Flowers and written tributes were already beginning to pile up outside the high-end Pacific Place mall, while demonstrators attending Sunday’s rally were being urged to bring a flower to pay their respects and attend an evening candlelit vigil.

Jimmy Sham, from the main protest group the Civil Human Rights Front, likened Lam’s offer to a “knife” that had been plunged into the city.

“It’s almost reached our heart. Now the government said they won’t push it, but they also refuse to pull it out,” he told reporters.