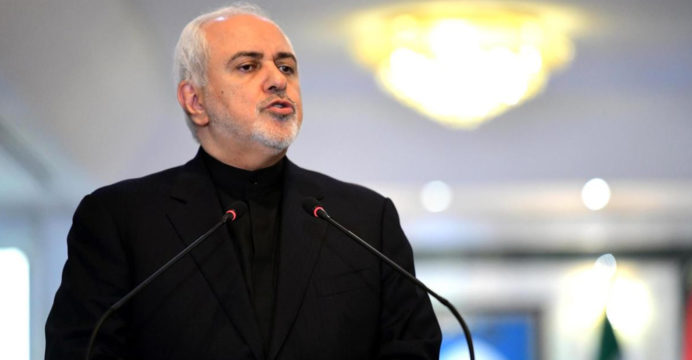 Europe in ‘no position’ to criticise Iran: Zarif

European countries are in “no position” to criticise Iran, Foreign Minister Mohammad Javad Zarif said Sunday ahead of a visit by his German counterpart Heiko Maas.

Germany’s top diplomat is due in Tehran on Monday, against a backdrop of Iranian pressure for Europe to uphold commitments made under a 2015 nuclear deal since abandoned by the United States.

“Europeans are certainly in no position to criticise Iran, even about issues that have nothing to do with” the agreement, Zarif said in televised remarks to journalists.

Iran signed the landmark accord with China, Russia, Germany, Britain, France and the United States, leading to sanctions relief in exchange for Tehran curbing its nuclear programme.

But last year, US President Donald Trump walked away from the accord and Washington has since imposed sweeping sanctions on Iran.

European and Western policies “have only caused damage in the region,” Zarif said.

“Now some countries like Germany have stopped selling arms to Saudi Arabia for bombarding the people of Yemen, some other countries haven’t done so,” he added.

“In general, the West has allowed the autocratic regimes in our region to commit crimes.”

In May, Iranian President Hassan Rouhani said Tehran would no longer implement some parts of the nuclear deal and threatened to go further if the remaining parties failed to deliver sanctions relief.

Zarif said that Europeans have “a duty” to ensure that Iran’s economic relations return to normal.

On Friday Iran rejected an idea mooted by France to re-open nuclear talks, warning that seeking to broaden the existing agreement could lead to its collapse.