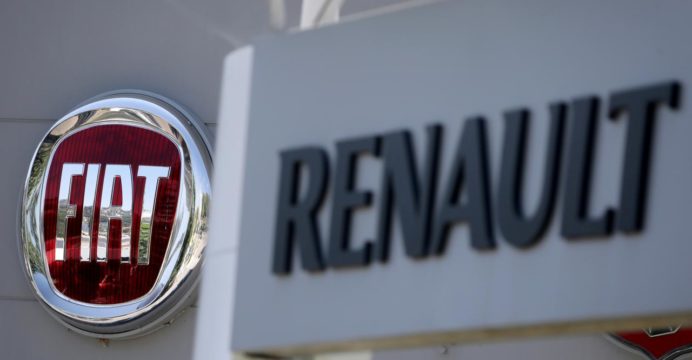 Fiat Chrysler has withdrawn its merger proposal for French carmaker Renault, the Italian-American firm has said. The announcement followed a failed attempt by Renault board members to reach a decision on the offer.

Renault said it had been unable to reach an agreement because French government representatives had requested a postponement.

The French government is the biggest shareholder in Renault, with a stake of more than 15%. Japan’s Nissan also owns 15% of Renault, while Renault owns 43.4% of Nissan’s shares. Renault’s share price fell by nearly 7% on Thursday in response to Fiat Chrysler’s decision, reports BBC.

Fiat Chrysler made the offer for Renault at the end of last month, describing it as a “transformative” proposal that would create a global automotive leader.

A new Renault Arkana mid-size crossover in a showroom at a Renault factory in Moscow, Russia

Carmakers have faced pressure to consolidate amid major industry shifts, including towards electric vehicles.

“It has become clear that the political conditions in France do not currently exist for such a combination to proceed successfully,” Fiat Chrysler said in a statement.

But the carmaker said it remained “firmly convinced of the compelling, transformational rationale” of the proposal, the terms of which were “carefully balanced to deliver substantial benefits to all parties”.

Industry shifts toward electric models, along with stricter emissions standards and the development of new technologies for autonomous vehicles, have put increasing pressure on carmakers to consolidate.

Older, and often heavily indebted carmakers, also face rising competition from new entrants in the motoring sector including Tesla, as well as cash-rich companies developing driverless technology such as Amazon and Google-owned Waymo.

The Fiat Chrysler tie-up with Renault would have allowed the companies to share development costs on key technology such as electric vehicles and self-driving cars and to create an important player in the automotive industry.

The merger proposal came at a time when Renault had already been facing challenges as part of an alliance with Japan’s Nissan. The former chief executive of both Renault and Nissan, Carlos Ghosn, is awaiting trial following his fourth arrest in Japan amid allegations of financial misconduct. The allegations have put a strain on the 20-year-old alliance, which also includes Japan’s Mitsubishi Motors.