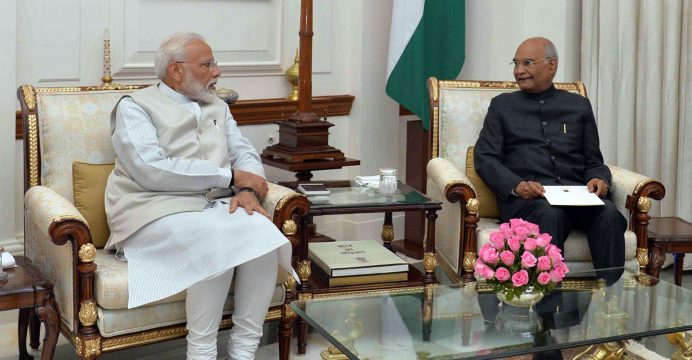 Modi was appointed as the Prime Minister for the second consecutive term soon after the NDA leaders on Saturday elected Modi as their leader in parliament, according to official sources.

Narendra Modi is likely to take oath as Prime Minister on May 30.

“Exercising powers vested in him under Article 75 (1) of the Constitution of India, the President, Shri Ram Nath Kovind, today appointed Shri Narendra Modi to the office of Prime Minister of India,” said a statement issued from the President’s secretariat here last evening.

The President also requested Modi to “advise him about the names of others to be appointed members of the Union Council of Ministers and indicate the date and time of the swearing-in-ceremony to be held at Rashtrapati Bhavan”.

Modi was formally intimated when he called on the President at Rashtrapati Bhavan in his capacity as leader of the BJP Parliamentary Party, which has majority support in parliament following the general election to the 17th Lok Sabha.

Earlier on Saturday, a delegation of the National Democratic Alliance led by BJP President Amit Shah called on the President at Rashtrapati Bhavan when he handed over a letter to him stating Modi’s election as leader of the BJP Parliamentary Party.

The Bharatiya Janata Party (BJP) won 303 out of 542 seats in the Lok Sabha while its arch rival the Indian National Congress led by Rahul Gandhi won 52 seats.

The Prime Minister-elect Narendra Modi prior to call on President Ram Nath Kovind, addressed to the NDA party meeting yesterday at parliament’s Central Hall where he urged the newly elected Lok Sabha members of the NDA alliance to win the confidence of the minorities and take everyone along for national unity.

“Sabka Vishwas, Sob Ka Sath, Sabka Vikas….This will be our mantra,” he told the NDA senior leaders in Hindi.

He however asked the newly elected MPs not to discriminate between voters in their constituencies.

After the landslide victory in 17th Lok Sabha election, Narendra Modi is going to visit Gujarat today to seek the blessings of his mother for becoming successful in his second term in office.

He will also visit his parliamentary constituency Varanasi tomorrow to thank the voters for re-electing him.