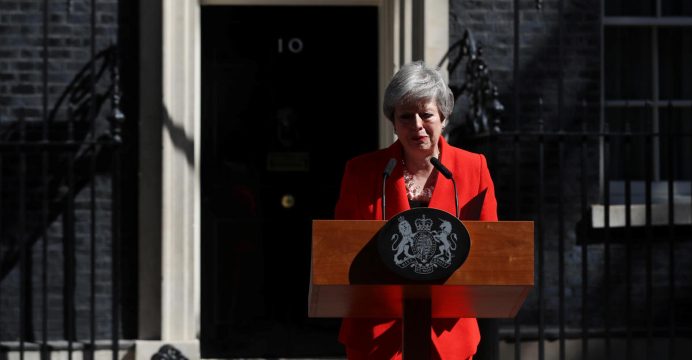 Contenders to succeed Theresa May as Britain’s prime minister prepared to launch their leadership campaigns on Saturday, leaving Brexit shrouded in uncertainty.

A tearful May announced her resignation on Friday, leaving the Brexit process for exiting the European Union in limbo and raising the risk of Britain crashing out of the bloc in a few months.

May’s statement inevitably triggered the starting gun on a two-month contest to replace her.

May will step down as Conservative leader on June 7 but stay on as prime minister until party members have chosen her successor, which will happen by July 20.

Intentionally or otherwise, May was summing up her legacy as most here see it today. She is the prime minister who spent nearly three years trying to honor the result of the landmark 2016 Brexit referendum and, despite a relentless effort, failed.

In the summer of 2016, May thought she was the right person at the right moment. British voters had stunned the world and voted to take the U.K. out of the European Union. Then Prime Minister David Cameron, who had called the vote for political reasons — never thinking it would actually pass — resigned.

Both have embraced the prospect of a no-deal Brexit.

But whoever takes over from May will like her face the same razor-thin majority in parliament, an EU with no intention of changing the divorce offer that MPs have rejected three times, and proponents both for and against Brexit who will never compromise.