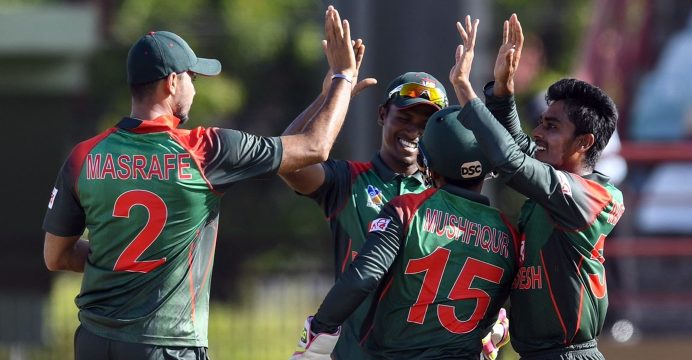 Bangladesh would stick to their original 15-member World Cup squad as the team management is pleased with the performances of the players in the recently concluded tri-series tournament in Ireland.

The performance of the World Cup-bound players were so strong that the other players like Taskin Ahmed, Farhad Reza, Yasir Ali and Nayeem Hasan who were included into the side, were not given any chance.

The team however can modify their squad before the deadline on May 23, set by International Cricket Council. Some teams like Pakistan and England had already brought up massive changes to their squad but Bangladesh probably would not follow the suit if the version of the chief selector Minhajul Abedin Nannu is taken into the consideration.

“The 15 players who are in England now are confident about their ability. The confidence specially enhanced after lifting the title of the tri-series,” Nannu said.

“They are capable of performing at the highest level. There is good balance in the team and the team effort that we showed during the tri-series was excellent. Hopefully they will carry on it,” he added.

What pleased Minhajul more that Bangladesh showed a sign of shrugging off the top order vulnerability as Soumya Sarkar looked in formidable touch to form a destructive partnership with Tamim in every game he played.

Soumya hit three successive half-century including a match-defining 68 ball-79 against West Indies in the final.

His competitor in the opening position Liton Das also used his chance to good effect after playing against Ireland, the match that turned out to be dead rubber.

So Bangladesh has two inform batsmen who could accompany Tamim Iqbal in the top of the order. The middle order has been in form with Shakib Al Hasan, Mushfiqur Rahim, Mahmudullah Riyad and Mohammad Mithun showing a great consistency in the last tournament.

While Bangladesh was worried about late impetus from the lower down the order, Mosaddek Hossain Saikat assured them they would have that aplenty in him. Mosaddek smashed Bangladesh’s fastest half-century (20 balls) on the way to his 27 ball-52 not out which helped Bangladesh break the title-drought in multinational tournament in grand style.
Pacer Abu Jayed Rahi who looked like losing his place to Taskin Ahmed, eventually impressed the selectors with 5-58 against Ireland in the dead rubber. And thereby it is highly likely that the selectors would not modify the squad.

Most of Bangladesh’s World Cup squad is now training in Leicester before the squad – including captain Mashrafe Mortaza and Tamim Iqbal, who were given a break – head to Cardiff for their two warm-up games against Pakistan and India on May 26 and 28 respectively.