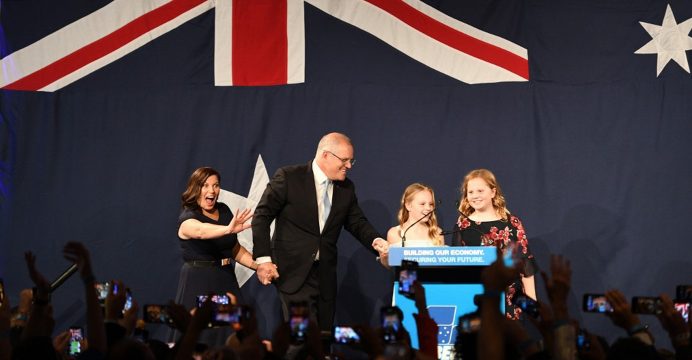 Prime Minister Scott Morrison’s Liberal-National coalition will hold at least 77 seats in the 151-member lower house, one more than needed to govern on its own, ABC’s election analysts projected.

The coalition will not hold a majority in the Senate, the upper house, meaning it will need the support of independents and minor parties to pass legislation.

A number of close races across the vast island continent were still to be officially decided following Saturday’s vote, with the formal count by the Australian Electoral Commission not expected to conclude until later this week.

Among Morrison’s first tasks following his victory was forming a new cabinet after several moderate ministers chose to retire from politics rather than contest the election.

Morrison has indicated he will also make promised income tax cuts a priority once the parliamentary numbers are confirmed.

His stunning win has prompted soul searching within Labor, which was leading all the opinion polls in the two years prior to Saturday.

“Saturday wasn’t Labor’s night but the sun still came up the next morning,” Bill Shorten, who stepped down as Labor leader on Saturday night after the loss, wrote in The Sydney Morning Herald Monday.

“The fight goes on and the cause that we champion, equality of opportunity for all Australians, endures. We can’t change the past but we can change the future and that’s what politics is all about.”