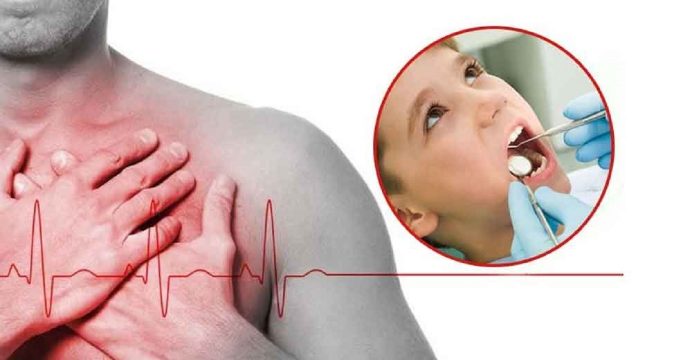 Children who develop cavities and gum disease may be more likely to develop risk factors for heart attacks and strokes decades later than kids who have good oral health, a recent study suggests.

Researchers did dental exams for 755 children in 1980, when they were eight years old on average, then followed them through 2007 to see how many of them developed risk factors for heart attacks and strokes like high blood pressure, elevated cholesterol, high blood sugar, and hardening of the arteries.

Overall, just 33 kids, or 4.5 percent, had no signs of bleeding, cavities, fillings, or pockets around teeth that can signal gum disease. Almost six percent of the kids had one of these four signs of oral infections, while 17 percent had two signs, 38 percent had three signs, and 34 percent had all four signs.

Kids who had even one sign of oral infection were 87 percent more likely to develop what’s known as subclinical atherosclerosis: structural changes and thickening in the artery walls that isn’t yet serious enough to cause complications.

Children with all four signs of poor oral health were 95 percent more likely to develop this type of artery damage.

Oral infections are among the most common causes of inflammation-induced diseases worldwide, and periodontal disease in adults have long been linked to an increased risk of cardiovascular disease, researchers note in JAMA Network Open.

Most people get cavities and gum disease for the first time in childhood, and these conditions can develop into more serious infections and tooth loss if they aren’t properly treated, the study authors note. Treating these oral health problems in childhood can also reduce inflammation and other risk factors for hardening of the arteries.

“This emphasizes how important good oral hygiene and frequent check-ups with a dentist starting early in life are for general health,” said lead study author Pirkko Pussinen of the University of Helsinki in Finland.

More than four in five kids had cavities and fillings, and 68 percent of them also had bleeding during dental exams. Slight pocketing around the gums was observed in 54 percent of the kids, although it was more often found in boys than in girls.

Both cavities and pocketing that can signal gum disease were associated with thickening of walls of the carotid arteries, blood vessels in the neck that carry blood from the heart to the brain. This indicates the progression of atherosclerosis and an increased risk for heart attacks and strokes.

The study wasn’t a controlled experiment designed to prove whether or how cavities or other oral health problems might directly cause heart attacks or strokes. Not everyone with subclinical atherosclerosis or other risk factors will go on to have a heart attack or stroke.

Poor oral health in childhood was also associated with an increase in blood pressure and body mass index in early adulthood, noted co-author of an accompanying editorial Dr. Salim Virani of Baylor College of Medicine and the Michael E. DeBakey VA Medical Center in Houston.