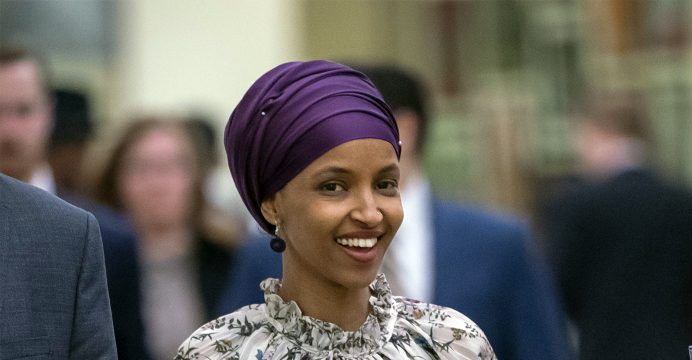 US Muslim lawmaker Ilhan Omar, caught in a political maelstrom

A former refugee and the first black Muslim woman elected to Congress, Ilhan Omar embodied the American dream in her November victory but faces controversies fueled by her own words and President Donald Trump’s hostility toward her.

Omar’s win was celebrated as historic, and her arrival in Washington contributed to the appreciation that Congress was finally becoming a more diverse, representative American institution.

Since her January swearing-in, the 37-year-old Minnesota Democrat has been at the center of a swirling debate about anti-Semitism, discrimination and the role of an outspoken first-year congresswoman who challenges the White House and makes her own party’s leadership chafe.

Omar’s remark that US political backing for the Jewish state is fueled by money from a pro-Israel lobbying group, and her open support for a boycott and divestment movement against Israel led to vocal criticism from both sides of the political aisle.

“I just happen to embody all of those identities,” Omar said on Colbert’s CBS show last week.

Belligerence against the lawmaker has ramped up dramatically after a clip emerged of her characterizing the September 11, 2001 attacks in the United States as “some people did something.”

On Friday, Trump tweeted a video that juxtaposed the snippet — which some Democrats say was taken out of context — with images of the hijacked planes crashing into the World Trade Center’s Twin Towers in New York.

Omar said Sunday in a statement that many of the increased threats she had received were “directly referencing or replying to the president’s video.”

Trump’s startling tweet prompted House Speaker Nancy Pelosi, the most high-ranking Democrat in the country, to denounce his “hateful and inflammatory rhetoric” and demand he take the video down, as she ordered a security review to safeguard Omar and her family.

Even before Trump’s post, a man was arrested April 5 and charged with threatening to murder Omar, after he called her office and said “I’ll put a bullet in her (expletive) skull,” according to Omar’s statement.

The threats on social media were equally graphic. “She needs to be executed,” one Twitter user wrote.