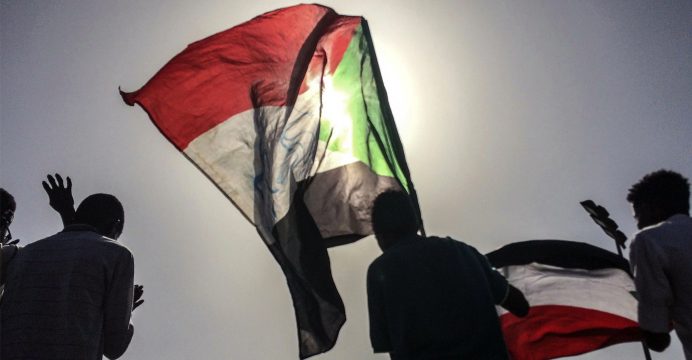 Sudanese protesters on Sunday demanded the country’s military rulers “immediately” hand power over to a civilian government that should then bring ousted leader Omar al-Bashir to justice.

Thousands remained encamped outside Khartoum’s army headquarters to keep up pressure on a military council that took power after ousting Bashir on Thursday.

The organisation that spearheaded the protests against Bashir, the Sudanese Professionals Association, called on the council “to immediately transfer power to a civilian government”.

The SPA also demanded the next “transitional government and the armed forces bring Bashir and all the chiefs of the National Intelligence and Security Service (NISS)… to justice”.

“The Sudanese Professionals Association calls on its supporters to continue with the sit-in until the revolution achieves its demands,” it added.

The military council later held a press conference at which its spokesman did not respond to the protesters’ latest demands. Instead it announced the appointment of a new intelligence chief.

Earlier the military council met with political parties and urged them to agree on an “independent figure” to be prime minister, an AFP correspondent present at the meeting said.

“We want to set up a civilian state based on freedom, justice and democracy,” a council member, Lieutenant General Yasser al-Ata, told several political parties, urging them to agree on the figures to sit in civilian government.

The protesters have insisted civilian representatives must join the military council.

A 10-member delegation representing the protesters delivered their demands during talks with the council late Saturday, according to a statement by the Alliance for Freedom and Change umbrella group spearheading the rallies.

The foreign ministry urged the international community to back the military council “to achieve the Sudanese goal of democratic transition”.

It said council chief General Abdel Fattah al-Burhan was “committed to having a complete civilian government and the role of the council will be to maintain the sovereignty of the country”.

Talks between protest leaders and Sudan’s new rulers were followed Sunday by a meeting between Washington’s top envoy to Khartoum, Steven Koutsis, and the military council’s deputy.

Mohammad Hamdan Daglo, widely known as Himeidti, told Koutsis “about the measures taken by the military council to preserve the security and stability of the country,” the official SUNA news agency reported.

Himeidti is a field commander for the Rapid Support Forces (RSF) counter- insurgency unit, which rights groups have accused of abuses in the war-torn Darfur region.