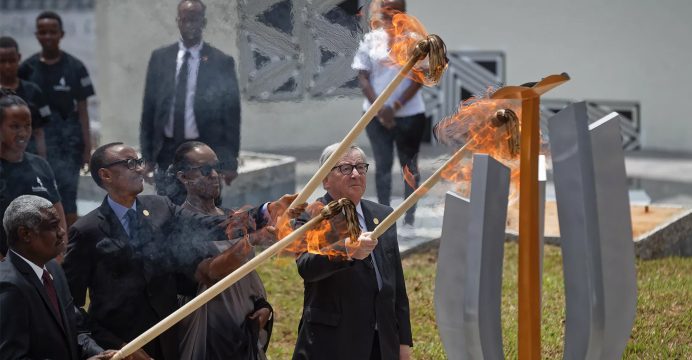 Rwanda honors those killed in genocide 25 years ago

Rwanda began a week of solemn ceremonies on Sunday to commemorate the lives of 800,000 Tutsi and moderate Hutus murdered during the Rwandan genocide, a three-month-killing spree that began 25 years ago, reports Reuters.

President Paul Kagame laid a wreath at the Gisozi genocide memorial site, where over a quarter a million of people are buried, before an afternoon of speeches and song. Later, a candelit vigil was held in the packed national soccer stadium.

“There is no way to fully comprehend the loneliness and anger of survivors and yet over and over again we have asked them to make the sacrifices necessary to give our nation new life. Emotions had to be put in a box,” Kagame said, his tall, thin form projected onto television screens around the nation.

“We are far better Rwandans than we were. But we can be even better still. We are the last people in the world who should succumb to complacency.”

The 100 days of slaughter began on April 6, 1994, after President Juvenal Habyarimana and his counterpart Cyprien Ntaryamira of Burundi — both Hutus — were killed when their plane was shot down over the Rwandan capital. The attackers have never been identified.

Among the legacies of the genocide is the International Criminal Court, which grew out of tribunals to investigate and prosecute those responsible for atrocities committed in Rwanda and during the Balkan wars of the 1990s.