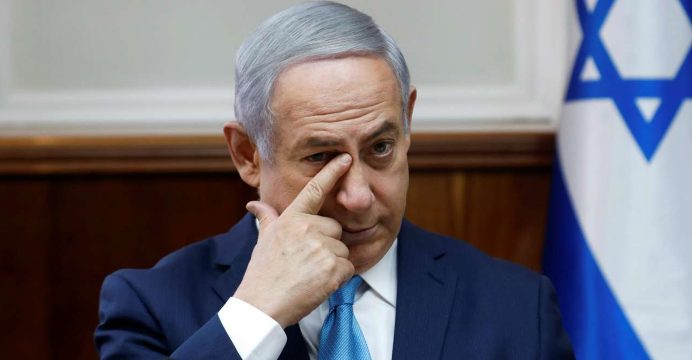 Israeli Prime Minister Benjamin Netanyahu has pledged to annex settlements in the occupied West Bank if he wins Tuesday’s elections, a deeply controversial move that could prove to be the death knell for the two-state solution.

His comments late Saturday, just days before the closely-fought April 9 poll, could be seen as an appeal to right-wing voters who do not believe in the feasibility of a peace agreement with the Palestinians.

“I will apply (Israeli) sovereignty, but I don’t distinguish between settlement blocs and isolated settlements,” he said in an interview with Channel 12 television.

He did not provide details on how quickly he planned to move ahead with it and whether it would involve all settlements.

If done on a large-scale, annexation could end already fading hopes for a two-state solution with the Palestinians.

It is a move the Israeli far-right has long pushed for.

Settlements built on land occupied by Israel in the 1967 Six-Day War are deemed illegal by the international community and their ongoing construction is seen as a major barrier to peace.

In an interview broadcast Friday, Netanyahu said he told US President Donald Trump he would not remove settlements or people as part of a future American peace plan.

“I said there shouldn’t be the removal of even one settlement” from the West Bank, Netanyahu told Israel’s Channel 13 television.

More than 400,000 Israelis live in West Bank settlements as part of Israel’s military occupation of the territory, where more than 2.5 million Palestinians live.

A further 200,000 Israelis live in settlements in occupied east Jerusalem, over which Israel has already implemented full sovereignty.

The Palestinians hope to establish a state of their own in the West Bank, east Jerusalem and the Gaza Strip.