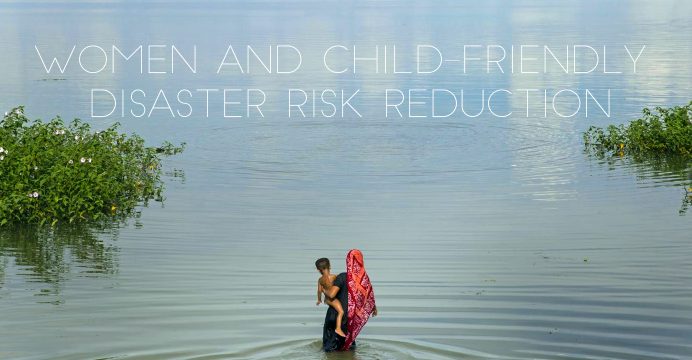 Climate-sensitive disasters are associated with the socio-economic determinants of human well-being and health inequalities. For example, the poorest and socially marginalized populations are the most vulnerable to climate variability and extremes. Given with the increased risk of natural disasters in Bangladesh (see Figure 1), children and women have been reckoned the worst affected groups.

The kind of clothing women wear, especially in Bangladesh where women wear long pieces of cloth called ‘sarees’, is found to be a significant obstacle to mobility and quick recovery during cyclones or in an emergency. Moreover, young children (below the age of 15), besides, the elderly (above 65) are also more vulnerable to climate-related mortality. These groups are susceptible during cyclones, for example, in the Sidr of 2007 and the Aila of 2009 in Bangladesh, due to their inability to run fast and physical and health vulnerabilities.

Notably, children below the age of two are more vulnerable to the impacts of climate change and associated natural disasters. Climate-related hazards, such as heat and floods affect child health. A published research article conducted in India found that exposure to climate-related events increases the likelihood of suffering from health-related issues such as fever, diarrhea, acute respiratory problems, stunted growth and being underweight in children below the age of five.

Women and children in a flood of 2017 in Bangladesh

Another published research article from Bangladesh concludes that children suffer from malnutrition as an adverse effect of cyclones. Thus, the exposure to and vulnerability from natural disasters may lead to high child mortality in a region or a country.

A disaster also accelerates infant or child mortality in Bangladesh. Degraded environment or increased natural disasters induce the risk of dying of children. However, Bangladesh has shown a remarkable decline in child mortality.

In 2015, drowning was the moat top cause of death of the total death from injury for children aged 1 and 17 years, while a higher child-drowning rate is evident in rural areas of Bangladesh. As a recommendation, the disaster risk reduction program should emphasize the infant issue and provide the infant with a unique monitoring and a balanced diet during the disaster.

Furthermore, increasing the disaster-related program at the school level to raise the awareness level of students, especially female students could be a better recommendation.

Women and children are more prone to the risk during a hazard and the disaster. During a disaster, vulnerable young women take shelter in a shelter house.

Zinnat Afroze, Social Development Officer of Plan Bangladesh, remarked, “Shelters are risky for girls. Besides, when parents die or become separated, girls are at risk.

Post-disasters are always chaotic and fertile times for abuse”. Younger girls face sexual harassments and violence when they take shelter in a shelter house. Studies confirmed that sexual harassment is a driver of early marriage in areas vulnerable to natural disasters in Bangladesh. There are studies confirmed the climate disasters-induced early or forced marriage in Bangladesh6, 7, 8. This, therefore, is a growing concern to confluence the policy of Disaster Risk Reduction considering the context of women.

Women bear the brunt of natural calamities in most cases and surprisingly the disaster risk reduction for them are overlooked mostly.

Women have a restriction in mobility due to the cultural constraints when a disaster adds fuel to the flame making women more vulnerable, which could be termed as a double vulnerability of women. To recommend, gender issue should be concerned in terms of response, mitigation, and recovery of disaster. As women have disproportionate effects than men, women’s role is quite negligible in decision-making, and participation in training related to climate change issues.

Khandaker Jafor Ahmed is a Bangladeshi doctoral student in the Department of Geography, Environment and Population at the University of Adelaide (UoA), Australia. Jafor's research interest falls within the broader field of population and environment, with a special focus on human fertility. Given the academic qualification (Bachelor and Master's degree in Sociology) and research experience (as a Research Associate in the Centre for Climate Change and Environmental Research at BRAC University, Bangladesh), his research seeks to explain the social impacts of climate change and natural disasters.
No Comments