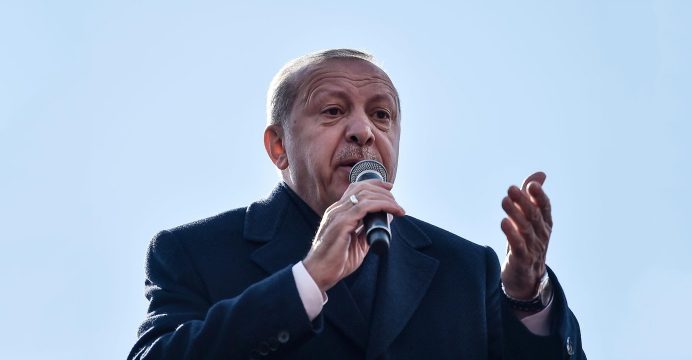 Turkey vote in test for Erdogan as recession hits home

Turkey voted in local elections on Sunday in a test for President Recep Tayyip Erdogan, with his ruling party risking defeat in the capital as an economic slowdown takes hold.

Erdogan and his Justice and Development Party (AKP) have won every vote since the party first came to power in 2002 but this time, analysts say the party could lose Ankara and even Istanbul.

Sunday’s poll was the first municipal ballot since Turks approved constitutional reforms in 2017 to create an executive presidency that gave Erdogan wider powers after a decade and a half in office.

But Erdogan, whose ability to win continuously at the ballot box is unparalleled in Turkish history, appears more vulnerable with the country’s economy in recession, unemployment up and inflation in double digits.

Much of the AKP’s success has been down to his perceived economic prowess, but days before the vote, the Turkish lira was sliding again, provoking memories of the 2018 currency crisis that badly hurt Turkish households.

Erdogan, who began his own political career as Istanbul mayor, campaigned hard across Turkey, often with several rallies a day, even though he is not on the ballot.

Looking to rally his base among conservative Turks, the president cast the election as a matter of survival, attacking opposition candidates by branding them as linked to PKK Kurdish militants.

“The economy is terrible,” said Husnu Acar, 53, after voting in a school in Beylikduzu on the outskirts of Istanbul.

“They are the ones with a survival problem,” he said of the AKP.

Voters are to elect scores of mayors, municipal councils and other local officials. Preliminary results are expected soon after polls close with official results released early in the week.

Two members of Saadet (Felicity), a religiously conservative party, were killed after an attack by an AKP candidate’s nephew in a polling station in Malatya, eastern Turkey, Saadet chairman Temel Karamollaoglu said on Twitter.

The two men, one of whom was also an election observer, died after a fight between two groups in Puturge district, private DHA news agency reported. The Malatya governorate said four individuals were detained.

Erdogan said the incident was “upsetting” after he voted in Istanbul, and he called Karamollaoglu shortly afterwards to offer his condolences, the presidency said.