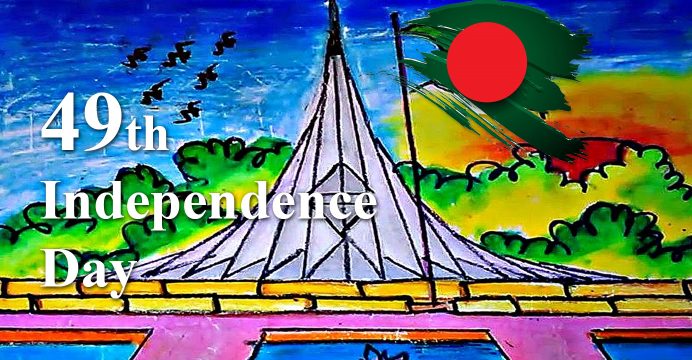 Bangladesh is celebrating the 49th Independence and National Day today, refreshing the resolution to uphold the spirit of the War of Liberation and build a ‘Sonar Bangla’ as dreamt by Father of the Nation Bangabandhu Sheikh Mujibur Rahman.

On the eve of the day, President M Abdul Hamid and Prime Minister Sheikh Hasina gave separate messages extending heartfelt greetings and warm felicitations to the countrymen living both at home and abroad, reports BSS.

The government has taken elaborate programmes to celebrate the day. On this auspicious occasion, glowing tributes are being paid to the martyrs and veterans of the War of Liberation.

The national mausoleum at Savar became the main venue of the celebration of the day where President Md Abdul Hamid and Prime Minister Sheikh Hasina placed wreaths early in the morning as a mark of profound respect to the memories of the martyrs.

The day is a public holiday. The national flag is flying atop all government and private buildings while all streets and important city intersections have been decorated with national and multi-colored miniature flags and festoons.

The national anthem ‘Amar Sonar Bangla’, written by Nobel laureate Rabindranath Tagore, is being sung simultaneously across the country and Bangladesh missions abroad.

Prime Minister Sheikh Hasina is scheduled to lead the nation in singing the national anthem at Bangabandhu National Stadium on the day.

The Pakistani military junta, in a bid to stop the legitimate movement of the Bangalees, arrested Bangabandhu on that night following his declaration of independence.

Later, Bangabandhu was taken to the then West Pakistan where he had to spend nine months in a dark condemned cell.

The Pakistani military junta in their monstrous outburst unleashed a bloody holocaust breaking the silence of the night following March 25 in 1971 when they mercilessly killed hundreds of innocent sleeping Bangalees, including teachers, students, police, soldiers, pedestrians and rickshaw-pullers, here.

The nation soon launched the War of Liberation at the call of Father of the Nation Bangabandhu Sheikh Mujibur Rahman in the early hours of March 26.

Bangladesh emerged as an independent and sovereign country on December 16, 1971 with the surrender of the Pakistani occupation forces, who killed three million innocent civilians, perpetrated atrocities on two lakh Bangalee women and burnt down lakhs of houses across the country during the nine-month bloody war.