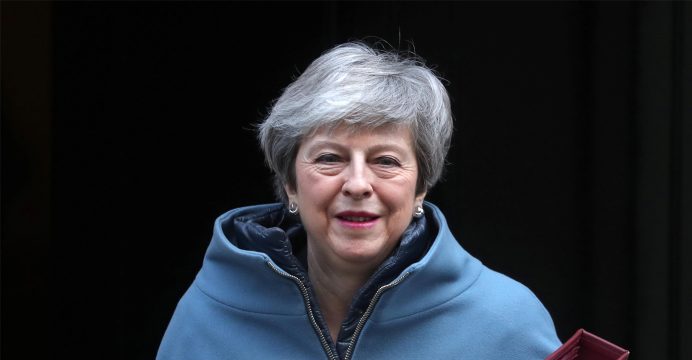 UK PM May warns lawmakers: back my deal or face long Brexit delay

Prime Minister Theresa May’s warned lawmakers that unless they approved her Brexit divorce deal after two crushing defeats, Britain’s exit from the European Union could face a long delay and could involve taking part in European parliament elections, reports Reuters.

After two-and-a-half years of tortuous divorce negotiations with the EU, the final outcome is still uncertain with options including a long delay, exiting with May’s deal, a disorderly exit without a deal or even another referendum.

May issued Brexit supporters an ultimatum: ratify her deal by a European Council summit on March 21 or face a delay to Brexit way beyond June 30 that would open up the possibility that the divorce could be ultimately thwarted.

The prime minister bluntly warned that Britain will be forced to take part in European parliamentary elections expected to place at the end of May if there is a longer extension to Brexit talks.

The Sunday Times said May will warn Brexit supporters that unless they support her deal they will face a “Hotel California Brexit” where you can check out, but never leave.

EU leaders will consider pressing Britain to delay Brexit by at least a year to find a way out of the domestic maelstrom, though there is shock and growing impatience at the political chaos in London.

Her deal, an attempt to keep close relations with the EU while leaving the bloc’s formal structures, was defeated by 230 votes in parliament on Jan. 15 and by 149 votes on March 12.

But May continues to fight to build support for her plan, which is expected to put before lawmakers for a third time next week, possibly on Tuesday.