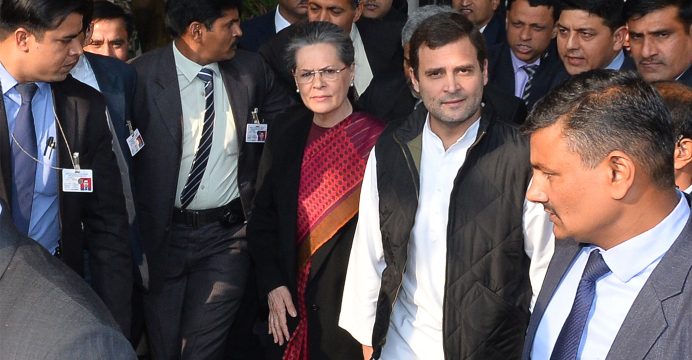 Rahul, Sonia to contest from Amethi, Raebareli seats in UP

President of Indian Congress Rahul Gandhi and his mother Sonia Gandhi will contest from Amethi and Raebareli constituencies of Uttar Pradesh in the upcoming general election to be held in April and May this year.

Rahul Gandhi and Sonia Gandhi are among 15 candidates named by the Congress in its first list released on Thursday for the national election just weeks away, according to media reports here today.

The Congress in its first list does not include Priyanka Gandhi Vadra, who joined politics in January and was made the party general secretary in charge of eastern Uttar Pradesh.

But, there was speculation that Priyanka Gandhi could contest from her mother’s constituency, Indian private TV channel NDTV reported.

Priyanka Gandhi has, for years, campaigned for her mother and brother in Raebareli and Amethi. Thursday’s announcement also ends speculation about Sonia Gandhi’s retiring.

The Congress announced that it will contest all 80 seats in Uttar Pradesh after the Samajwadi Party of Akhilesh Yadav and Mayawati’s Bahujan Samaj Party announced a grand alliance in January without the party.

The rivals-turned-partners made one concession for the Congress; they said they would not field candidates in Amethi and Rae Bareli.

The Congress list also included senior leader Salman Khurshid, who will contest from Farrukhabad, where he had contested from and lost in 2014.

The other leaders on the list for UP are RPN Singh from Kushi Nagar, Imran Masood from Saharanpur, Jitin Prasad from Dhaurahra, Annu Tandon from Unnao, Rajaram Pal from Akbarpur, Brij Lal Khabri from Jalaun and Nirmal Khatri from Faizabad.

In Gujarat, senior Congress leader Bharatsinh Solanki will contest from Anand. He had won the Lok Sabha elections from the seat in 2004 and 2009. But he lost to Dilipbhai Patel of the BJP in 2014.