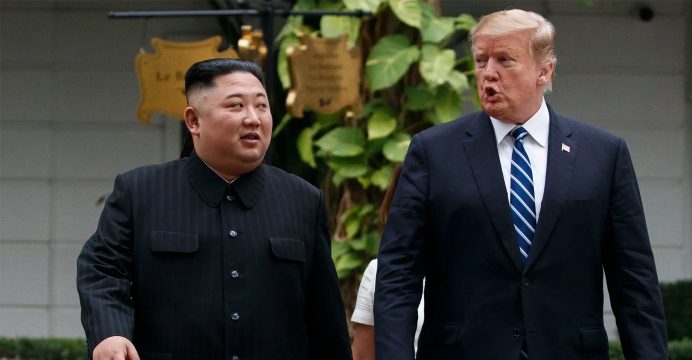 North Korea on Friday promised further negotiations with the US, as both sides sought to hold open the door while staking out their positions after their Hanoi summit spectacularly failed to produce a nuclear deal.

The second meeting between the North’s leader Kim Jong Un and US President Donald Trump broke up in disarray Thursday, with a signing ceremony cancelled and no joint communique issued.

Each sought to blame the other’s intransigence for the deadlock, with
Trump saying Pyongyang wanted all sanctions imposed on it over its banned weapons programmes lifted.

But in a rare late-night press briefing, the North Korean foreign minister
said it had only wanted some of the measures eased, and that its offer to
close “all the nuclear production facilities” at its Yongbyon complex was the
best it could ever offer. Despite the deadlock, the North’s official KCNA
news agency reported Friday that the two leaders had had a “constructive and candid exchange”.

Relations between the two countries — on opposite sides of the
technically still-unfinished Korean War — had been “characterised by
mistrust and antagonism” for decades, it said, and there were “inevitable
hardships and difficulties” on the way to forging a new relationship. It
described the Hanoi meeting as “successful” and said Kim had promised Trump another encounter.

Similarly, Trump said before leaving the Vietnamese capital that he hoped
to meet Kim again.

“Sometimes you have to walk and this was just one of those times,” an
unusually downbeat Trump told reporters.

“I’d much rather do it right than do it fast,” he said, while reaffirming
his “close relationship” with Kim. “There’s a warmth that we have and I hope that stays, I think it will.”

South Korea’s dovish President Moon Jae-in, who has brokered talks between the US and the North, sought to take the positives.

The talks had made “meaningful progress”, with Trump and Kim building
“more trust” and “mutual understanding”, Moon said in a speech in Seoul.