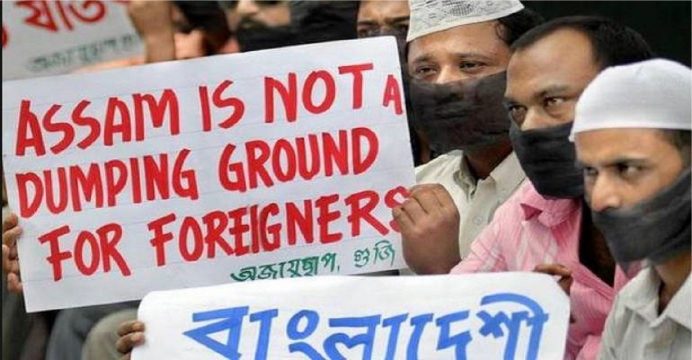 As if the people of northeast India became more conscious about India’s constitution, rule of law and its secular image abroad. So groups of people, including politicians, civil society group representatives, media personnel etc came to hit the streets raising strong voices against the Union government’s proposed citizenship amendment initiatives.

The move by the ruling Bharatiya Janata Party (BJP) to grant citizenship to Hindu, Sikh, Buddhist, Jain, Parsi and Christian refugees from Bangladesh, Pakistan Afghanistan ignited a firestorm in the region. The tide against the government was prompted by the arising apprehensions among northeastern indigenous people that they would lose their due rights after it got realized.

The region, which has the history of separatist movements maintained by various armed militant groups and where national flags were rarely hoisted on Independence & Republic Day in community functions till last few years, had observed a Bandh (total shut down) on 8 January 2019 protesting against New Delhi’s adamant attitude to pass the Citizenship (Amendment) Bill 2016 in Lok Sabha, lower house of Parliament.

The much-talked CAB was scheduled to table in Rajya Sabha (upper house of Parliament) on 13 February to get it finally enacted as law after necessary endorsements from the President of India. But at the last moment, the BJP led NDA government avoided placing it and seemingly left the bill to die a natural death.

Reasons may be the BJP could not garner necessary support from the opposition parties or it faced an uproarious situation in various parts of the region, but it brought smiles to thousands of agitators and many of them celebrated the occasion as an achievement. They organized a series of press briefings to extend their gratitude to the common people and definitely never forget to claim their credits.

Oppositions to the amendment initiative surfaced as the Indian citizenship cannot (must not) be conferred on the basis of religion because it is a secular country. Otherwise, it would go against the spirit of the constitution of the world’s largest democracy. The other view was that Assam had already taken the extra burden of illegal migrants in contrast to national cut-off year (’51) because of an agreement signed in 1985 between the leaders of historic Assam Movement and the Union government in New Delhi. Hence agitators from the State’s Brahmaputra valley vehemently opposed the proposal.

Guwahati on 23 January witnessed an impressive rally which was organized by All Assam Students’ Union (AASU) along with 30 indigenous groups to oppose the bill. The rally attracted over 3,000 strong gathering from different parts of the region taking a pledge not to allow New Delhi to pass it. By the evening, Krishak Mukti Sangram Samiti (KMSS) along with 70 other local bodies organized a procession in the city streets.

But perhaps not everyone was convinced with the arguments of agitators as a massive public meeting in the outskirt of Guwahati showed a different picture. Addressing the gathering of over hundred thousand audiences at Changsari locality under Kamrup district on 9 February, Prime Minister Narendra Modi reiterated that the concerned bill would be honored.

The spectacular congregation appreciated PM Modi when he termed the initiative as a moral responsibility for the center to support the asylum seekers from the Muslim dominated Afghanistan, Pakistan, and Bangladesh who had fled their countries of origin because of religious persecutions there.

Anti-CAB protests gained momentum since the Joint Parliamentary Committee (JPC) on the matter came to Guwahati last year for public hearings. A number of indigenous organizations, local politicians, intellectuals, media personalities etc assembled on the venue and raised their voices against the bill.

However, the subsequent hearing at Silchar in Assam’s Barak valley witnessed a different picture as most of the organizations supported the initiative. Even people of the valley were reluctant to join in the anti-bill protests, when Lok Sabha passed the bill on 8 January.

BJP’s Assam ally Asom Gana Parishad (AGP) pulled out of the government in Dispur as its leaders, most of whom were once AASU members, claimed that the proposed amendment would challenge the Assam accord, signed by the agitators with the Centre in presence of the then Prime Minister Rajiv Gandhi, after culmination of the six-year-long Assam agitation.

New found of nationalism was so intense that no human rights
activist or Assamese intellectuals came forward demanding pardon
(release) of separatist NDFB chief Ranjan Daimary when the militant leader was awarded life imprisonment by the court for his involvement in Assam’s serial blasts on 30 October 2008. Only Ranjan’s relatives argued that he should not get behind so that the ongoing peace talks with the government don’t face interruption.

Similarly, those brand new patriots simply ignored the news breaking from northern Myanmar here many hideouts of armed United Liberation Front of Assam (Independent) were busted by their security forces. Otherwise, there would have at least media statements concerning those issues, but this time they were seemingly not interested to take side with the separatists.

Assam chief minister Sarbananda Sonowal had however continued supporting the move arguing that it would not affect the region.

Remaining silent over the matter for months, Sonowal started making voluminous public comments that the Centre’s new initiatives would not harm the State, but it would benefit the locals in the long run.

Strong and sharp arguments were put by Assam’s outspoken minister Himanta B Sarma as he asserted that the initiative would safeguard the Assamese population. Expressing serious concern over the aggressive mentality of Bangladeshi Muslim settlers, Sarma claimed that the
initiative would prevent Assam from becoming another Kashmir.

However, an eminent human rights activist argued that the proposed amendment would have neither change the status quo on the ground nor does it allay long-standing concerns over the issue of refugees. Suhas Chakma, who hails from Tripura, also added that vociferous support or strident opposition to the bill was politically motivated.

Interacting with scribes at Guwahati Press Club recently, the New Delhi based rights activist asserted that the bill had not introduced any new element whatsoever as it proposed only to reduce the waiting period of submitting applications for citizenship via naturalization from 11 years to 6 years.

“So it would make no difference as those who had come to India by 2007 can now apply for citizenship. If the bill is duly processed, the asylum seekers could apply with the documents of 2012. Otherwise, their turn will come in 2023 in due course,” stated Suhas adding that anti-CAB rows would help nobody to pretend to be patriots.