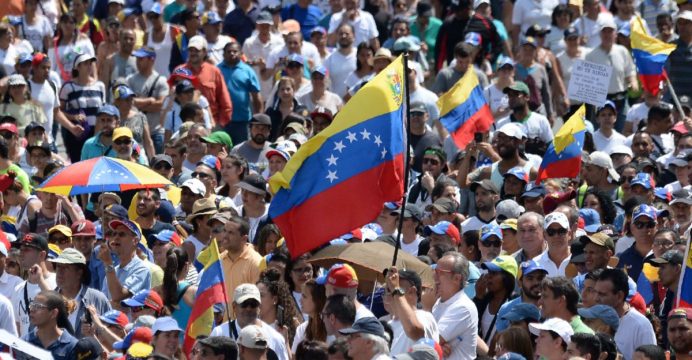 Venezuelan opposition leader Juan Guaido on Saturday said he was mobilizing thousands of volunteers to help bring American aid into the country next week as President Nicolas Maduro vowed to strengthen border security and block what he called a US invasion.

Guaido’s announcement came as tons of US food aid was piling up along the border with Colombia, in the latest flashpoint in the country’s building political crisis.

Guaido, whose claim to be interim president now has the support of more than 50 countries, told his rally that 600,000 people had registered to help bring desperately needed aid in through different border points.

“Not only will this be happening at the border where the volunteer movement will be, but in cities up and down the country where there will be
demonstrations on February 23 for the aid to come in,” the National Assembly leader told thousands of supporters, many in white T-shirts and hats in the colors of the Venezuelan flag.

In addition to the aid arriving in Colombia, Guaido said, more would be coming through Brazil and the Caribbean island of Curacao.

Several tons of US aid have already arrived in the Colombian border town of Cucuta. The US Army plans to deliver an additional 200 tons in coming days, a Pentagon official said Friday, speaking on grounds of anonymity.

Guaido repeated his call on Venezuela’s military — whose support for Maduro has been crucial in the growing crisis — to stand aside and let the aid pass.

“You have, in your hands, the possibility of fighting alongside the people who are suffering the same shortages you are,” Guaido said in a tweet addressed to soldiers.