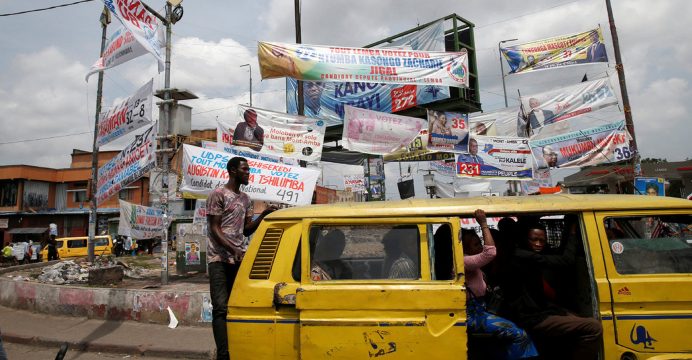 One of the world’s powder-keg countries faces a crunch test on Sunday when Republic of Congo heads into elections marred by delays, clashes and fears of polling-day chaos.

The vote crowns two years of turmoil, sharpening worries that the fragile
giant of central Africa may once more spiral into violence.

Twenty-one candidates are vying to succeed Joseph Kabila, who aged just 47
has been at the helm for nearly 18 years.

If all goes well, one will be sworn in on January 18 — the very first time
that the DRC will have achieved a peaceful transition of power since gaining
independence in 1960.

But the prospects of achieving this have dimmed as concern over the poll’s
credibility has risen, along with a diplomatic storm with Europe.

Sunday’s election will be the DRC’s first presidential ballot in seven
years.

It should have been held in 2016 when Joseph Kabila, in power since 2001,
reached a two-term limit.

But he remained in office, invoking a caretaker clause under the
constitution.

It came at the cost of protests that were bloodily crushed, leaving scores
of dead.

Then came a string of three election postponements — followed on Wednesday by delay in two regions hit by violence — and a storm over the introduction of electronic voting machines.

The turbulence has revived traumatic memories of the DRC’s bloodied past.

On Wednesday, the presidents of Angola, Botswana, Namibia, Zambia and the neighbouring Republic of Congo called for “peaceful, free, democratic and transparent” elections and expressed deep concern at the violence.

The conflict drew in countries from around central and southern Africa and
its legacy lies heavily today on the east of the country, where militias
fight over resources.