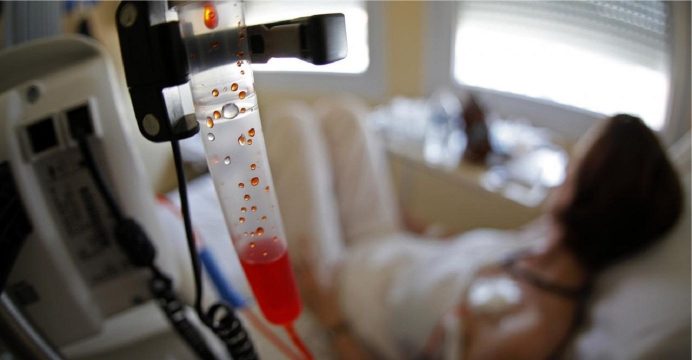 Nearly one in 10 cancer patients treated with chemotherapy or newer targeted drugs may be hospitalized for serious kidney injury, a Canadian study suggests.

The study involved roughly 163,000 patients who started chemotherapy or targeted therapies for a new cancer diagnosis in Ontario from 2007 to 2014. Overall, 10,880 were hospitalized with serious kidney damage or for dialysis, reports Reuters.

This translated into a cumulative acute kidney injury rate of 9.3 percent, the study found.

People with advanced tumors were 41 percent more likely to have acute kidney injuries than patients with early-stage cancer.

Compared to the group as a whole, individuals who already had chronic kidney disease were 80 percent more likely to be hospitalized for a kidney injury, and people with diabetes had a 43 percent greater chance.

“Patients should be aware that kidney injury can result during cancer treatment – both due to cancer itself and the drugs used to treat it,” said lead study author Dr. Abhijat Kitchlu of the University of Toronto.

Many medicines that treat tumors are removed from the body by the kidneys and can damage certain cells within the kidneys, Kitchlu said.

“It may be possible to reduce the risk of acute kidney injury by maintaining good hydration and in some cases, avoiding other drugs that can increase risk to the kidneys,” Kitchlu added. Medications that can damage the kidneys include ibuprofen and other non-steroidal anti-inflammatory drugs(NSAIDs), certain blood pressure medicines, and diuretics. In fact, in the study, older patients taking water pills or certain heart medications were also at higher risk for serious kidney problems.

“Patients should seek early medical attention when concerned about dehydration or infection, as the symptoms related to kidney injury (decreased urine output, swelling, nausea, fatigue or confusion) may only occur after the kidneys have been damaged,” Kitchlu advised.

In the current study, patients were more than twice as likely to develop acute kidney problems within the first 90 days of starting cancer treatment than they were later on, researchers report in the Journal of the National Cancer Institute.

Patients who are already at high risk of kidney damage because of health problems like diabetes may be able to take cancer drugs that are less likely to damage the kidneys, said Leah Siskind, of the University of Louisville Medical School in Kentucky.

“However, these less nephrotoxic chemotherapeutics are often less effective at reducing tumor burden,” Siskind, who wasn’t involved in the study, said by email.

Patients at high risk for kidney damage should discuss alternative drugs or doses with their physicians to see if they can treat tumors in a way that minimizes their chance of kidney injury, advised Dr. Laura Cosmai of San Carlo Borromeo Hospital in Milan, Italy.

And all patients should be on the alert for potential warning signs of kidney problems like dehydration, nausea, vomiting or diarrhea, Cosmai, who wasn’t involved in the study, said.

Vigilance is important because “cancer patients who develop acute kidney injury during treatment do have reduced survival odds,” Cosmai said.