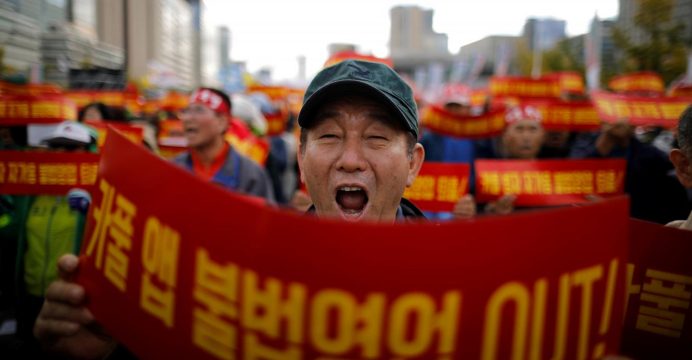 No Uber or Airbnb in South Korea

When Choi Ba-da pitched his car-sharing firm Luxi to Hyundai Motor officials in 2017, he told them there would be no future for South Korea’s top automaker if it failed to embrace emerging technologies.

His pitch worked: Hyundai agreed to buy a 12 percent stake in Luxi for $5 million, its first investment in a car-sharing firm as it joined rivals in the race for new-age transportation.

President Moon Jae-in’s administration says the country’s decades-old growth model, powered by a handful of large exporters such as Hyundai and Samsung, has reached its limit in the face of Chinese competition and rising labor costs.

To offset slowing growth in sectors such as autos, ships and chips, it created a new ministry for start-ups last year and has boosted funding to cultivate new technologies.

But the government has been too slow to remove cumbersome regulations for start-ups, wary of upending the country’s economic order or upsetting powerful labor unions, according to interviews with a dozen entrepreneurs, investors and executives.

That has left South Korea surprisingly resistant to disruptive technologies despite its tech-savvy image, they say.

In a statement to Reuters, Hyundai said it sold its stake in Luxi as the investment “did not fit a business model the company pursued”, without elaborating.

Hyundai’s chief innovation officer Youngcho Chi also said South Korean restrictions on ride-sharing to unspecified “commuting hours” as one reason and said the automaker had concluded that Luxi was not going to work out.