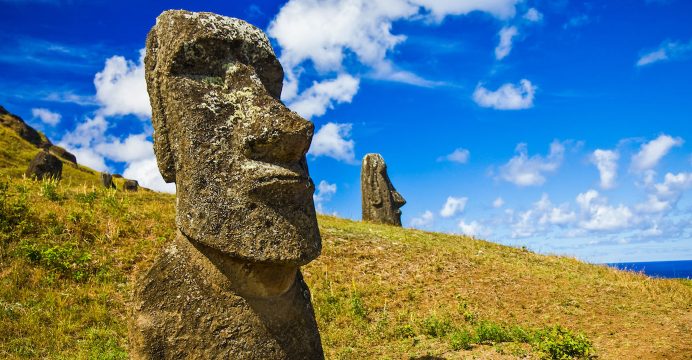 The mayor of the Chile’s Easter Island territory conceded on Monday that the British Museum might be a better home for a massive native Polynesian statue taken by British seamen 150 years ago.

Pedro Edmunds Paoa said Easter Island had a “thousand” of its iconic statues, known as the Moai, “both buried, ignored and discarded” and lacked the means to maintain them.

“Those thousand are falling apart because they are made of a volcanic stone, because of the wind and the rain are. We need global technology for their conservation,” he said.

He said one statue returned to the island from the Argentine capital Buenos Aires “four or five years ago” was now housed in a square where stray dogs urinated on it.

His comments will add weight to the argument of the British Museum to keep artifacts that originate from other nations in London where they are carefully curated and popular exhibits with visitors from around the world.

FILE PHOTO: A view of “Moai” statues in Rano Raraku volcano, on Easter Island, 4,000 km (2486 miles) west of Santiago, in this photo taken Oct. 31, 2003. Easter Island’s mysterious “Moai”, giant head statues carved out of volcanic rock, are in danger of being destroyed by years of tropical rains and wind as well as careless humans and farm animals. Experts have called on the international community to commit funds to preserve the monoliths, whose mystery draws tourists to the world’s most remote inhabited island. RIGHTS FREE REUTERS/Carlos Barria//File Photo

Last month, a delegation of Chilean officials and Easter Island dignitaries including Paoa’s brother, the Rapa Nui Council of Elders President Carlos Edmunds Paoa, traveled to London to appeal for the return of the seven-foot (2.13-meter) tall basalt figure, known as “Hoa Hakananai’a,” meaning “lost or stolen friend” in the local language.

It was taken from the island, located 2,480 miles (3,990 km) west of the Chilean capital Santiago, in 1868 by Richard Powell, the captain of HMS Topaze, and presented to Queen Victoria who later gave it to the British Museum.

Pedro Edmunds Paoa said there had been intense debate on the island about whether the Hoa Hakananai’a should be returned or not.

“That Moai is in a museum where six million people come each year to visit it.”

He suggested that he would prefer a financial commitment from the British Museum to help in the preservation of all Rapa Nui monuments.

“It would not be an economic agreement, it would be an agreement to help Rapa Nui in what needs to be done in Rapa Nui for conservation”, he said, using the ancestral name of the island.

The British Museum was not immediately available for comment. Chile’s ministry of heritage, which has lobbied for the statue’s return, declined to comment.