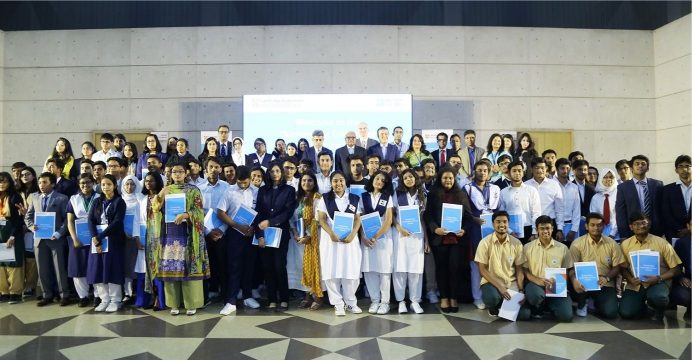 Forty-eight students have won ‘Top in the World’ awards from Cambridge Assessment International Education (Cambridge International) for their exceptional performance in the June 2018 Cambridge examination series.

Students from schools across the country were recognized for their outstanding academic achievements at an awards ceremony at International Convention City, Bashundhara on 8 December 2018 which is jointly hosted by Cambridge International and the British Council, Bangladesh.

The students achieved the highest marks in the world in a range of individual subjects across Cambridge IGCSE, Cambridge O Level and Cambridge International AS & A Level qualifications. Thirty-five students also achieved ‘Top in Country’ awards across these qualifications. In total Ninety-eight students in Bangladesh received Outstanding Cambridge Learner Awards.

Andrew Newton, Acting Director, British Council stated, “”Your achievements as the top of the English medium education sector are the result of many years of hard work, courage and commitment. May this be the springboard for even further success as leaders of your country”

Ruchira Ghosh, Regional Director, South Asia, Cambridge International said, “Cambridge International’s main aim is to prepare students for life, by developing deep subject understanding and key skills such as creativity, critical thinking and problem solving. It gives us immense joy to witness our learners accomplish their goals and dreams with the help of our programmes. We would also like to thank all the teachers and parents who supported and guided the learners towards the correct path and helped them achieve such success.”

The forty-eight ‘Top in the World’ award winners came from thirteen schools in Bangladesh. Bangladesh has also seen a significant increase in the total number of winners and awards compared to the previous year.